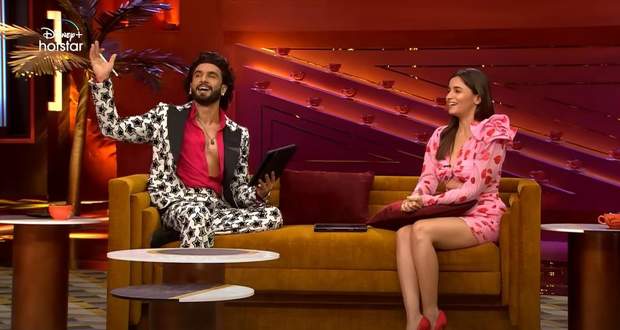 Koffee with Karan Season 7 is back with its fun and controversial statements from the most popular faces of Bollywood.

The First Episode of (Grand Launch) Koffee with Karan 7 on 7-07-2022 will happen at 7 PM. So here is the magic number of the seventh season launching on 7 in the seventh month at 7 PM.

In the 1st episode of Coffee with Karan (7 July 2022), Karan will have Ranveer Singh and Alia Bhatt as his first guests.

Ranveer and Alia will share their experiences of married life with many inside facts landing in front of the cameras.

As Karan asks Alia about one reality about marriage that is highlighted as a fantasy, Alia answers that there is nothing like Suhaagraat in reality.

With many interesting sessions and different activities, Ranveer and Alia giggle at each other's jokes and make Karan laugh too.

To watch the entire episode online or download Koffee with Karan today's episode, download the Disney+hotstar app or visit www.hotstar.com.

Karan says that he is glad to return after 3 years with a new season post-pandemic which is still obsessed with airport looks, gossip, and love lives of Bollywood stars.

Without wasting any more time, Karan calls the guests for the first episode of season 7 who are newly married but not to each other, Ranveer Singh and Alia Bhatt.

Ranveer chants the Ganesh mantra for an authentic start to the show and shares a hug with Karan along with Alia.

As the gap of three years comes under the spotlight, Karan and Alia mention the attacks that Koffee with Karan faced by nameless haters as a vulgar show.

Ranveer says that he does not care what others think about the show as he enjoys spending time with his friends like that.

Pointing to the trolls who highlight Karan as a snake and gay, Ranveer asks them to leave him alone as he is a pure-hearted person.

Ranveer says that he enjoys wearing “not normal” fashion and always being cheerful as he considers that to be his trademark.

Karan asks both about the lockdown period during the pandemic

Karan says that the pandemic in 2019 made all of them locked up in their houses at some point in time and asks both Ranveer and Alia whether they experienced any anxiety or just enjoyed their me-time in isolation.

Alia goes first and says that she was busy looking after Rishi Kapoor’s health and passing away during the March to June period.

Visiting Rishi Kapoor at the hospital, maintaining treatment facilities with Ranbir, and spending time with Neetu Kapoor after he passed away consumed most of Alia’s time.

Alia says that growing up in a small family with individualistic goals, she was very surprised to see the unity in the Kapoor family.

Whatever is done, the whole family joins and enjoys it together, which makes Alia realize the joy of having people around her.

As Ranbir is a very traditional and ritualistic person, Alia had to merge in with his ideals of spending quality time, pujas, and festivals together with the whole family.

Although it was a bit new, Alia explains it as a very cute and loving thing to happen in her life.

Coming to Ranveer, Karan asks him how he manages to tackle the cultural and behavioral differences between his and Deepika’s family

Deepika’s family being a toned down and quiet family compared to the loud and buzzing family of Ranveer, Karan asks Ranveer how he manages to balance his personality.

Ranveer replies that he has a special wardrobe in Bangalore solely for the occasion of visiting his in-laws containing only white tops with jeans.

Despite the differences, Ranveer considers Deepika’s family as lovely people who are extremely sweet and grounded in nature.

Initially, Deepika’s parents were shocked to meet Ranveer but after spending 10 years knowing them, now they have become a part of his own identity.

Alia shares her meeting and proposal moment with Ranbir

Alia says that her relationship with Ranbir sort of just started without any pushes and stuck together till the very end.

It was when after a long time both Alia and Ranbir were single and all of Alia’s friends asked her to get together with Ranbir.

Their spark started in a flight where they both went to a workshop regarding Brahmastra.

Ranbir almost did not sit beside Alia due to some malfunction in the seat and both enjoyed sharing notes with each other.

Talking about Ranbir’s proposal to her, Alia does not share the entire incident but says that she was blown away by Ranbir’s preparation of everything.

Alia talks about how Karan and Ranveer reacted when she revealed her marriage to Ranbir.

Karan asks Ranveer and Alia how they formed their genuine friendship

Alia recalls their meeting on the sets of Gully Boy but they did not get to bond while shooting as it was very hectic.

She and Ranveer got to talk and form their friendship when they were doing the promotions of Gully Boy.

Karan points out that Alia and Ranveer were communicating actively with each other while Alia was shooting the Gangubai film with Sanjay Leela Bhansali.

As a veteran actor who has worked on numerous films with Bhansali, Ranveer turned out to be a great guide to Alia who helped her to push her limits.

Ranveer and Alia both mention that it is a once-in-a-while opportunity to work with Sanjay Sir as his movies require a creative mindset.

Karan and Alia reveal that Ranveer is a huge gossip who loves to discuss everything with everyone.

Alia recalls when she was talking to her housekeeper Carol on the sets and Ranveer was listening to them with utmost concentration.

From gossiping to mimicry, Alia reveals that Ranveer is a great mimic artist who can do impressions on so many personalities.

Ranveer says that he and Alia are very similar to each other in several aspects which helps them to bond with each other.

If he remains lucky in the future, he will surely want to continue their friendship in the coming days.

Karan asks Ranveer and Alia to circle the things they have done in their lives from the bingo box on the iPad.

Ranveer circles many things while Alia limits herself to only three points.

Karan discovers that Ranveer has a separate sex playlist and he has done a quicky in his vanity van.

Ranveer and Karan laugh their hearts out on hearing that Alia used to have an email id named punkbabe_21@gmail.com.

Karan plays the rapid-fire round with Ranveer and Alia

Karan introduces the Koffee gang who will decide the winner between Ranveer and Alia and proceeds to ask the questions.

Ranveer reveals many interesting things about his likes and dislikes in this session.

Alia reveals that she has the best chemistry with Varun which upsets Ranveer.

On being asked who complimented her on the best thing for her performance in Gangubai, Alia reads a cute message from Ibrahim Ali Khan.

Ranveer wins the rapid-fire round and bags the hamper for himself.

Karan reads out three names of movies from which one is fake and Ranveer and Alia have to guess it.

Alia one-handedly earns points in the next round related to TV shows.

Both Ranveer and Alia share information about their wedding days.

Ranveer and Alia call one person from the industry and gain points.

Alia wins the overall round and wins a special gift from Karan.

Click Here to Watch the Full Episode Online on Hotstar 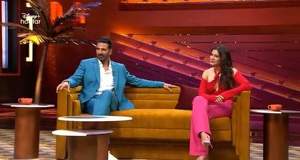 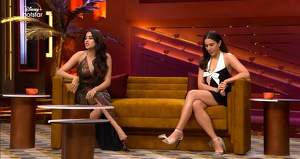 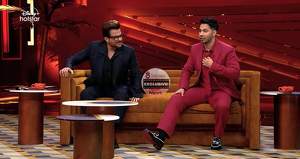 © Copyright tellybest.com, 2020, 2021. All Rights Reserved. Unauthorized use and/or duplication of any material from tellybest.com without written permission is strictly prohibited.
Cached Saved on: Friday 30th of September 2022 10:21:32 PMCached Disp on: Saturday 1st of October 2022 12:12:09 AM