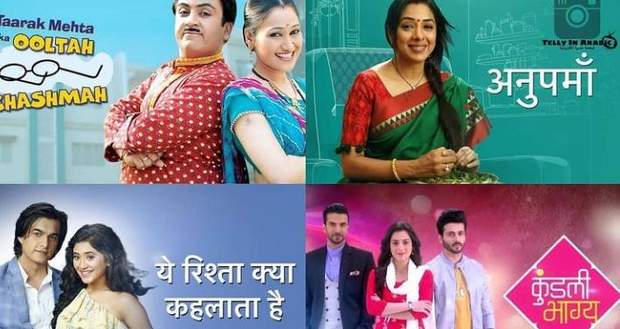 The Online TRP rating/ranking for Serials/Shows for November month is finally released.

The hit/miss TRP rates of Indian Hindi serials and reality shows are out based on the online platform telecasts like Disney+Hotstar, Sonyliv.com, Voot.com, Zee5.com, and so on.

Anupama TV serial TRP Rank continues to remain #1 in all our hearts. Being the most-watched, it has retained its No.1 spot on the TRP chart.

Star Plus TV channel has managed to occupy the top 2 positions on the TRP chart with Yeh Rishta Kya Kehlata Hai in the second position. The love triangle between Abhimanyu, Akshara, and Arohi has become a super hit.

Sony TV has managed to grab the next 2 positions as well. The Kapil Sharma Show TRP ranks 4th while Bade Achhe Lagte Hain 2, a soap operas gets the 5th Rank.

SAB TV’s TMKOC has dropped down to 6th position on the Online TRP List.

Bhagya Lakshmi (Bhagyalaxmi), a Zee TV serial has surprisingly managed to take over the 7th rank on the chart.

No reality shows have been able to place themselves under the top 10 TRP rating list for November.

However, Bigg Boss 15 is one step away from entering the chart with a rating score of 12.0.

The following table shows the rankings and ratings of the Top 10 Hindi TV serial TRP online and their TRP points for week 47 (fourth week of November).

Let's see if the ranks will be the same or not in the next upcoming week's TRP ratings.