The winner of Lock Upp 2022 will be chosen through public voting and the Lock-Up winner's name will be announced on the finale episode which will be airing this Saturday which is the 7th of May 2022.

Who is Finalist Payal Rohatgi?

Lock Upp 2022 finalist Payal Rohatgi was unsure of the gameplay in the first few weeks however, she started killing it in further weeks.

The praises, as well as accuses Payal has received throughout the season, are giving her a lot more chances to win the title of Lock Upp.

Payal had started her career by winning the Supermodel Miss Tourism World.

Above all this, Payal has been in various TV serials and Hindi films after which she entered the Survivor India reality show succeeded by Nach Baliye 7.

Finally, Payal's name started to spawn in various controversial topics by which she ended up in Lock Upp's first season.

Now, Payal Rohatgi is looking forward to proving to be a lone wolf and winning the trophy in the finals.

Munawar Faruqui is a talented Indian stand-up comedian and rapper with a huge fan following.

Though Munawar's initial intentions were just to entertain the audience, he got arrested in 2021 under the act of Hate Speech Laws in India.

The controversy since he was released did not stop and Munawar's journey shifted from Stand-Up to Lock Upp.

However, Munawar has played an excellent game since the start of the season and has proved himself to be the sole winner of the show.

Shivam Sharma is an Indian actor and model and the limelight caught him after he was a part of Splitsvilla 13.

The controversy that brought Shivam into Kangana's Lock Upp was his flamboyant behaviour in trying to impress women of any age.

Do you know who Lock up Final episode contestant Azma Fallah is?

Also, she is another contestant from Splitsvilla 13.

In Lock Upp, Azma is one of the funniest prisoners as she keeps trolling everyone.

However, being funny and cute isn't enough to win a reality show like Lock Upp. So, Azma lacks the qualities to be a winner of Lock upp.

Anjali boosted her career by getting featured in various Punjabi Music videos after being a model.

Kangana locked up Anjali in her badass jail for controversies over being trolled for applying the abundant amount of make-up on her face and filters on her videos.

Though Anjali is small in age, she has given nice competition to everyone in the jail.

However, she lacks the features to win the trophy in the finals.

Get to know Finalist Prince Narula!

Prince is an Indian model and actor who got fame with his participation in reality shows and acting in a few fiction serials.

He is the only reality show star in the Indian television industry who emerged as the winner of four consecutive reality shows.

Prince ended up in Kangana's Lock Upp as a trouble maker after the 7th week and has done his job perfectly.

Though Prince is a tough competition for everyone in the game, his tag of troublemaker may restrict him from being eligible for winning the trophy.

Who will win Lockup, Predicting the Lock Up winner!

After being aware of the gameplay of all the prisoners in Kangana's jail, there is great competition between the two most deserving players who are Munawar Faruqui and Payal Rohatgi.

We anticipate, "Munawar Faruqui is the winner of Lock Up, AltBalaji, MX Player Show of Season 2022".

We wish all the best for the grand finale contestants (prisoners) to win Lock Upp 2022 title and be crowned the winner of the most successful reality show hosted by Kangana Ranaut.

Below mentioned contestants played till the last day of the Finale:

Saisha Shinde is India's first transgender fashion designer and she decided to opt for gender reassignment surgery to proudly be who she is.

Lock Upp was Saisha's platform to come in front of the world without any fear.

Though Saisha has been confused about whether she really wants to win this reality show or not, she has made a great impact on minds with her way of playing the tasks.

However, Saisha hasn't been a tough player enough to get hold of the Lock Upp winner trophy and got eliminated on 6th May 2022.

After this, she did a Bollywood debut with the movie Nasha.

Poonam has been seen using the same commitments to gain votes in Lock Upp which is supported by Kangana with the words that it is her job and talent by which she is entertaining her audience.

It won't be a shock to see Poonam leave with no trophy in hand because of her absence of mind in the jail matters currently.

Poonam Pandey got eliminated on 3rd May 2022. 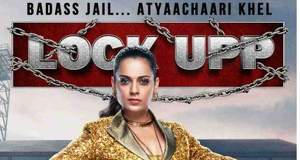 © Copyright tellybest.com, 2022, 2023. All Rights Reserved. Unauthorized use and/or duplication of any material from tellybest.com without written permission is strictly prohibited.
Cached Saved on: Thursday 26th of January 2023 04:35:49 AMCached Disp on: Monday 6th of February 2023 07:22:36 PM