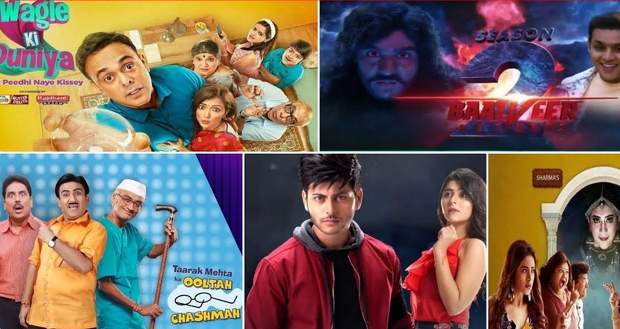 BARC and Online TRP Ratings of Indian, Hindi serials are released every week, and they rate serials TRP on the basis of their performance on OTT platforms and on TV total viewers.

The following list of serials performed lower (and lowest) TRP ratings this week:

The Kaatelal And Son's TRP rating points this week are low compared to the previous week’s TRP rating.

Kaatelal & Sons is a show based on the life of two sisters who struggle to run their ancestral barbershop because of societal pressure.

Hero Gayab Mode On TRP rating gets the same TRP points as the previous week still ranks low in the TRP rating list.

Hero Gayab Mode On is the story of how Veer goes on a quest to save the magical ring from reaching the wrong hands.

Wagle Ki Duniya is the sequel of the iconic show with the same name and story that revolves around the kids of the main characters of the previous season.

Madam Sir's story is based on a Mahila police station in Lucknow with all-female police officers including Karishma, Haseena, and Pushpa.

Madam Sir serial ranks low in the SAB TV TRP charts and gets the same TRP rating as Hero Gayab Mode On serial.

Mere Sai serial is the biopic of Sai Baba who is worshipped by millions and helps all in Shirdi.

Punyashlok Ahilyabai is a story based on the life of Ahilyabai who ruled the region of Malwa.

Jijaji Chhat Par Koi Hai TRP Rating is surprisingly good and it attracts most of the family viewers. The story is about Sharma and Jindal family who live in a two-story building and claiming that the property is theirs.