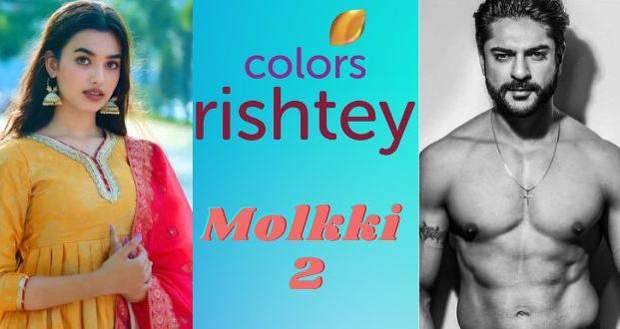 After the success of season 1 of the popular serial Molkki on Colors TV channel, the makers of the serial are bringing the most awaited season 2 of Molkki soon on the channel Colors Rishtey.

Molki 2 serial highlights the Molkki tradition where the brides are sold to older men for the highest bid of money and how the girls spend their lives afterward.

Molki serial is being produced under the banner of Balaji Telefilm Productions by Ekta Kapoor and Shobha Kapoor.

The show's cast is going to be studded entirely of new actors namely Vidhi Yadav, Ashish Kapoor, and Piyali Munsi.

Molkki 2 start date and the telecast timings of the serial are to be announced soon.

Here is the detailed description of the serial Molkki 2 on Colors Rishtey, its upcoming story, twists, spoilers, gossip, written updates, TRP ratings, and many more. The plot of the serial Molkki was based on highlighting the ill practices of child marriage and how the young girls were sold off as Molkki's to elder men who are almost double their ages old enough to be their fathers.

Season 1 of the serial ended on a happy note with Prakashi giving a statement against Satyam to get him jailed and turning herself to the police.

Virendra, Purvi, and the remaining family return to the haveli happily and end the show by progressing in their lives as a happy family.

It is speculated that the story of season 2 will be centered on a new Molkki who will be played by the actress Vidhi Yadav while her buyer will be Ashish Kapoor.

To know more about the serial Molkki 2 download the Voot app or go online on voot.com.

Season 1 of the serial Molkki got popular among the audience for its unique concept and how the realistic approach to how many Molkki's accept their fates and spend their lives.

Actress Priyal Mahajan had gotten a major breakthrough in the TV industry after bagging the main role of Molkki, Purvi in the first season of the Molkki serial while Amar Upadhyay's return to the television industry with the role of Virendra Pratap Singh made the audience fall in love with him even more.

Moreover, the serial is made by Balaji Telefilms Productions which has already produced so many popular serials like Yeh Hai Mohabbatein, Nach Baliye on Star Plus, Naagin Franchise on Colors TV, and Brahmarakshah on Zee TV which give the second season of Molkki a thumbs up in terms of TRP.

Molkki season 2 is also expected to garner very good TRP ratings and make a position in the top 5 serials in TRP charts as season 1.

Q. Where can I watch the serial Molkki Season 2?

A. You can watch the serial on the channel Colors Rishtey or on the Voot app.

Q. When will the serial Molkki Season 2 go on air?

A. The release date of the serial is not released yet but it is expected to release around August 2022.

Q. Which actors are playing the male and female lead roles in the serial Molkki 2?

A. Vidhi Yadav and Ashish Kapoor are roped for the lead roles of male and female protagonists in the serial.

Q. Who is the producer of the serial Molkki 2?

A. Ekta Kapoor and Shobha Kapoor are the producers of the serial.

© Copyright tellybest.com, 2022, 2023. All Rights Reserved. Unauthorized use and/or duplication of any material from tellybest.com without written permission is strictly prohibited.
Cached Saved on: Wednesday 25th of January 2023 09:11:49 AMCached Disp on: Thursday 9th of February 2023 08:23:42 AM