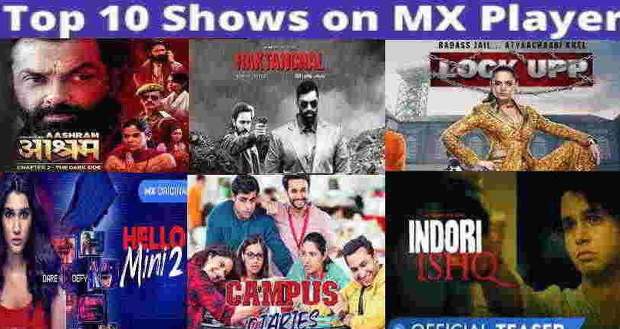 MX Player is an Indian video streaming and video on demand platform developed by MX Media & Entertainment.MX Player has a free version as well as a paid, ad-free option.

From tv serials of Sony TV and Sony Sab to movies in different languages, from Hindi, Punjabi content to English, Chinese and Korean dramas, MX Player has a lot to offer.

Broken but beautiful, Put your head on my shoulder, Anamika, Ek Thi Begum, Queen, My Girlfriend is an alien, POW, Flames and the list of shows, serials, series, and movies of MX Player goes on.

Since its launch in 2011, MXP has risen to be one of the top free video players across Android, iOS, and Windows platforms. It's particularly popular among Android users. MXplayer has some of the best shows available on its platform.

Here is a list of the top 10 shows and series on MX Player:

Aashram is a Hindi-language crime drama web series directed by Prakash Jha. It has received a lot of appreciation from the critics as well as the audience. Aashram has received 1 billion views in total.

The story revolves around a preacher Baba Nirala (Bobby Deol), whose followers (mostly from the disadvantaged sections of the society) have blind faith in him and will do anything that he asks of them.

But in reality, Baba Nirala is a conman turned godman, who ensures that his devotees devote their wealth to him and stay attached to the ashram for life, while politicians Hukum Singh (Sachin Shroff) and incumbent CM Sundar Lal (Anil Rastogi) vie for his support in the upcoming State Legislative Assembly Elections owing to his large number of followers, which only increase after a pop singer, Tinka Singh (Adhyayan Suman) decides to conduct tours with Baba Nirala to promote his new song.

Meanwhile, SI Ujagar Singh (Darshan Kumar) is a cop who isn't interested in his job and simply follows his seniors' orders, until he meets Dr. Natasha (Anupriya Goenka) in a case related to a skeleton found on the property of an industrial group which has good ties with Sundar Lal.

Her constant pestering, along with the stubbornness of a small-time journalist Akhivendra Rathi a.k.a Akki (Rajeev Siddhartha) encourages him to take up this case, along with his assistant-cum-sidekick Sadhu Sharma (Vikram Kocchar).

A thriller and romantic web series that will give you the goosebumps and the lurking fear when you step out of your house the next time.

MX Original’s new web series “Hello Mini” is the story of a stalker who is both a blessing and a curse. Directed by Fark Kabir, and written by the popular novelist Novoneel Chakraborty & Croctales, the latest Hindi web show features Anuja Joshi, Priya Benerjee, and Arjun Aneja in the lead roles.

The story is of a 22-year-old girl named Rivanah who has moved to Mumbai from Kolkata in search of her new life. A new job, a new home, alone in a new city, and a new uninvited guest into her life.

Life is going on smoothly and she is enjoying her adventure out alone in the city of dreams, Mumbai, where she is finding the path to her dreams. But somebody is following her, making her life both easy and miserable at the same time.

Hello Mini has the biggest plot twists which keep the audience coming for more.

The coming-of-age drama show revolves around the life of six students at Excel University. Along with the usual drama of college life, the series explores sensitive topics of ragging, bullying, and discrimination on Indian campuses.

Campus Dairies has reached the most popular category in 2022 in a short amount of time.

A con man’s art of deception is not less than an art and MX Player’s series, Matsya Kaand explores one such story. The series is a story about Matsya Thanda, a con man who believes in using his charm, wit, and power of words rather than physical violence to get his way.

Matsya along with his teammates pull off some of the biggest and most unique cons in the country. Their plan is simple. Fix their target, prey on them, leave forever and move on to the next job.

But, fate catches up with them when an uncompromising cop ACP Tejraj Singh is given charge to catch hold of Matsya and his team.

Tejraj Singh has a reputation of being stern and not resting before catching his target. He is known to even go against the system and tweak the rules to get what he wants. With this begins the cat and mouse chase between Tejraj and Matsya.

While Matsya plans all his moves meticulously, Tejraj seems to be inching closer to each of his plans.

Indori Ishq is a story about love, romance, and the passion that comes with it.

Kunal has been in love with his classmate Tara for a long time now but hasn’t had the courage to propose to her. Both of them go to an Altaf Raja concert one night and that is when Kunal asks her out finally. He had tried to propose to her in the past as well but had failed twice.

However, this time, things seemed perfect and so did the moment until things start going down when Kunal suffers an epilepsy attack. Tara couldn’t answer his question amidst his medical emergency.

Indori Ishq is the most popular in the romantic category.

Raktanchal is the latest Hindi web series that highlights the epitome of crime in Purvanchal in the 1980s.

When a young Vijay Singh takes charge against the tender and crime lord Waseem Khan, the city turns into the mayhem of havoc.

Driven by rampant bloodshed, violence, and personal vendettas, the series is sure to provide you with wholesome entertainment.

If you love to watch an action-packed crime drama, you would not miss the real-life events-inspired series Raktanchal.

Raktanchal has received a lot of love in the thriller category.

The Matram's Season 2 shooting has been stopped when season 1 was removed from the platform because of Adult scenes as per Intermediary guidelines for social media and digital ethics code 2021.

Mastram Series was released on 30 Apr 2020 on Mx Player but in Feb 2021 this series had been removed from Mx Player because of The Adult Content.

Naveen Sikhera (Mohit Raina) is promoted to Senior Superintendent of Police (SSP) and is transferred to the city.

Sikora’s transfer is a punishment more than a promotion. The city is ruled by two gangs Shaukeen gang in the east and the Dedicha brothers rule the west.

The two gangs have divided up turf to carry on with their businesses. These two gangs' terror is at its peak, such that even the local police never dare to question them.

IPS officer Naveen Sikhera makes his way to clean the city as the new SSP.

“Magic ” is the drug that has everyone hooked to it since the day it has been made available on the streets. The makers, the users, the doctors, the pharmaceutical company which is involved in it, a news reporter, a local gangster, a detective, and a drug user himself, all are revolving around this drug.

This program is produced and created by Ekta Kapoor, the show's creator. The Kangana Ranaut-hosted Lock Up show event involves: Putting controversial celebrities in Kangana Ranaut's prison cells. Along with contestants, some Jailors are celebs as well.

LockUpp series is one of the top-searched shows of 2022 on MX player.

They have interesting games which are played by short-tempered celebs and elimination rounds that are intriguing for the audience.

© Copyright tellybest.com, 2022, 2023. All Rights Reserved. Unauthorized use and/or duplication of any material from tellybest.com without written permission is strictly prohibited.
Cached Saved on: Wednesday 25th of January 2023 04:06:17 PMCached Disp on: Thursday 9th of February 2023 04:51:07 AM