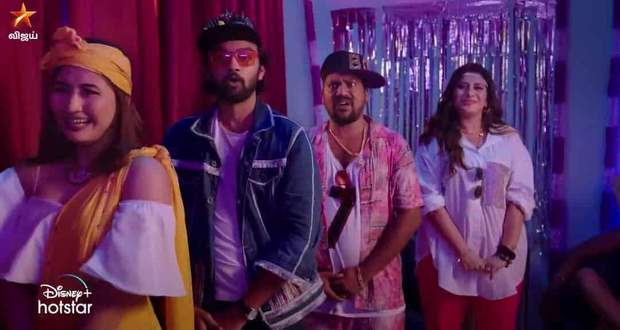 Raju Vootla Party is a reality show that centres on Raju and his colleagues who have fun in the show. They conduct funny and interesting games for contestants.

The latest promo of Raju Vootla Party (24-07-2022) starts with Raju sending his mother out of the station.

He then begins to party in the house with Iman Annachi, Priyanka Deshpande, Madurai Muthu, Sunita Gogoi and Shiva. They enjoy and celebrate in his house.

He announces the commencement of the new game show “Raju Vootla Party”.

The new promo for Raju Vootla Party (24 July 2022) shows Raju assuring the show to be a complete entertainment show.

The show includes quiz-based rounds, funny games and comedy which is all set to attract the audience.

Today's Raju Vootla party on 24th July starts with the funny entry of Raju. He dances with the audience.

Then he introduces Deepa as his mother and Imman Annachi as his father. Madurai Muthu gives a funny entry as his uncle in the director costume. Kili is the servant of the house.

Madurai Muthu makes fun of the sets with his timing jokes. Kili works in the kitchen as a servant.

Then Priyanka gives a surprise entry. Everyone welcomes her.

Reshma, Gabi, Julie and Suresh enter as special guests of the week. Everyone welcomes them. They introduce themselves to everyone.

The first task is announced by Raju as a "Social media task" where the guests must put one picture of themselves on social media and the one who gets the highest number of likes will be the winner.

Then Chutti Aravind enters as Raju's grandmother. She makes fun of all the guests.

Kili serves snacks and drinks to the guests. They enjoy the servings.

The next round is announced as a "Comments round" where the guests must reply to their negative comments on social media.

Gaby first plays this round. She gives smart answers to all her comments. They try to bring her into a funny controversy but she brilliantly cracks it.

Then, Reshma plays this round. She gives friendly answers and ends the round.

For Julie, picture-based memes are shown and she enjoys them and replies to them.

Sunitha enters as Raju's fiancee and asks him to marry her. She then asks the help of special guests to help her impress Raju.

Then the "Social media task" winner is announced as Gaby.