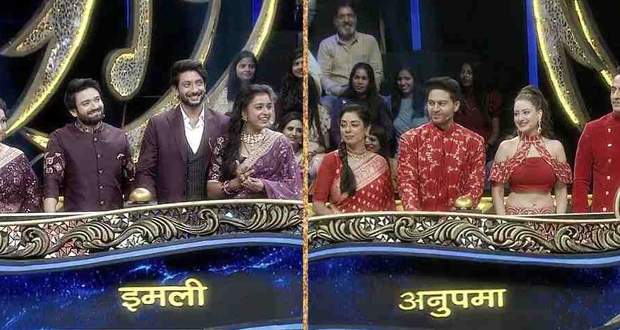 Episode 4 of Ravivaar with Star Parivaar (RWSP) starts with Arjun Bijlani and Amal Malik welcoming the viewers and announcing that today's Mahasangram is going to be between Team Imlie and Team Anupama.

Afterward, Arjun informs us that the first round will be for fifty thousand with a twist.

After a while, Arjun announced that the team who will win the maximum prize money at the end of all rounds will be the winner of the episode.

In this round, the teams will have to guess the song based on the instrumental of the song. However, this time, only one contestant from the team will be competing in each round.

Both teams compete with enthusiasm and have fun during the arguments. Team Imlie won the round and earned the chance to select a suitcase from the bank. Neela goes to the Bank and gets a chance to select the suitcase.

However, in the suitcase, instead of money Shamshera cutout is found after which Ranveer Kapoor and Vaani Kapoor make their entrance to promo the movie Shamshera.

Ranveer gives Neela a bag containing the money she got from the Ravivaar bank. Neela opens the bag and reveals that she won Rs 500.

In this round, the teams will be playing Dumb Charades and will have to guess the song based on the skits done by the family members of the star parivaar family. Kavya from Anupama and Aryan from Imlie come to give the clues.

After guessing song after song, team Imli won the round and got to select the suitcase from the bank. Vaani Kapoor goes to the bank and selected a suitcase worth Rs one lac.

Afterward, Anupama trains Ranveer on how to take care of a baby using a baby doll and gives him a certificate stating him as the best father.

In this round, the contestants have to sing the song based on the lyrics from the chorus of the song given on the board.

The supporting family members will also be able to stand with the teams and help them.

In the end, Team Anupama won this round. Ranveer goes to select the suitcase from the bank and selected a suitcase worth Rs two lac.

The latest Promo of Ravivaar with Star Parivaar (RWSP) for this Sunday 10-07-2022 looks spicy as it will be a competition between the Anupama family and Imlie family of Star plus Parivaar. Ranbir Kapoor will grace the show this weekend.

This week’s promo will showcase a historical fight between Anupama and Imlie’s cast where all the characters will try to gain an upper hand on other family characters.

At the same time, Anupama and Imlie indulge in a verbal battle to show their strengths and wilfulness in winning the competition.

Besides that, there are many more fun performances awaiting you this Sunday by the Anupama and Imlie of Starplus.

Get ready to make this Sunday (10th July 2022) full of entertainment, lessons, and laughter with Ravivaar with Star Parivaar available to watch on Star Plus at 8 PM.

© Copyright tellybest.com, 2022, 2023. All Rights Reserved. Unauthorized use and/or duplication of any material from tellybest.com without written permission is strictly prohibited.
Cached Saved on: Thursday 26th of January 2023 11:32:45 AMCached Disp on: Thursday 9th of February 2023 07:35:05 AM