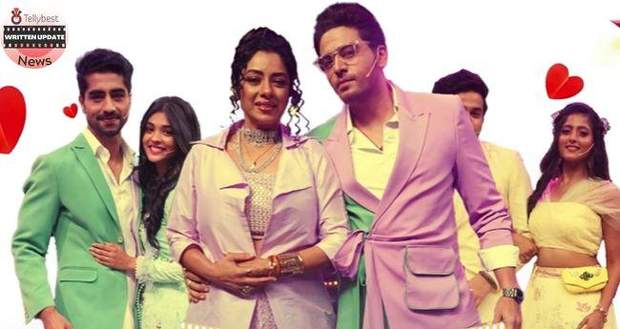 The Episode 14 of Ravivaar With Star Parivaar starts with Amal singing the song “Kaun Tujhe Youn Pyar Karega” while the couples dance one by one lost in each other.

Arjun also joined the stage and introduced the bond of love between different couples and welcomes everyone in the romance special of Ravivaar With Star Parivaar.

Both teams are geared up to win and challenge the other team.

In this round, the melody of one song is attached to the lyrics of another song participants have to guess the song to which the melody belongs. Both the team played with enthusiasm and Team Ek Duje Ke Liye won the round defeating Rab Ne Bana Di Jodi. Dhara goes to RWSP bank and brings a suitcase worth Rupees 50 thousand.

After the round, Arjun and Amal invited the couples to propose to their partner in a unique style.

Shiva and Raavi and Yuvaan and Banni performed beautifully and entertained the audience in a different way. When Anuj and Anupama’s turn comes, Arjun changes the rule and asks Anupama to propose to Anuj. Anupama did not disappoint and used the clues given by Arjun beautifully and creates an absolutely new flavour in romance.

In this round, both the teams have to guess the song based on the clues given by their family member. For team Ek Duje Ke Liye, Suman and Devraj come to give clues while Rakhi and Mama Ji comes to give clue to Rab Ne Bana Di Jodi. both the team participated with enthusiasm. Devraj flirts with Suman shamelessly while Mama Ji teases Rakhi with double-meaning talks. Between the flirting and teasing, Team Rab Ne Bana Di Jodi wins the round. Shiva goes to RWSP bank and brings the suitcase worth Rupees one Lac.

Anuj comes to the stage and tells Arjun to express his love for Anupama. Anuj pretends to draw Anupama but presents her with a blank canvas.  Anupama get angry and threw black dust on the canvass and it transformed into a painting. Anupama becomes extremely happy and confesses her love for Anuj.

Aryan also comes to express his love for Imlie as a reel couple and real couple. Later a scintillating dance performance completed their confession.

In this round, teams have to guess the songs based on the word clues given on the board. However, to earn the chance to guess the couple has to use petroleum jelly and a cotton ball to stick the cotton ball. On the nose without using hands. Dhara and Gombi win the chance first and guessed the song, then comes Imlie and Aryan who guessed the song correctly and finally Banni and Yuvaan also earned the chance to guess the song. Team Ek Duje Ke Liye wins the round.  Imlie and Aryan go to RWSP bank and bring the suitcase worth Rupees 2 lacs.

Star Plus family TV Show Ravivaar with Star Parivaar is a most entertaining show designed to keep the Star Plus viewers entertained on Sunday evenings.

This TV show brings together all Star Plus shows cast where all your favourite stars will come under one roof and entertain you in various ways.

The latest Promo of Ravivaar with Star Parivaar (RWSP) for this Sunday 11-09-2022 full of entertainment as romance will be celebrated on the RWSP stage among all the on-screen couples.

Not only that entertainment graph will be at its peak because the competition will take place between Ishq Wala Love and Dosti Wala love.

Arjun and Amal will ask the couples to confess their love for each other in a unique but comic way.

This week’s promo will showcase all on-screen couples romancing each other and telling stories about their love life.

Besides that, many more fun performances are awaiting you this Sunday by the Star Parivaar families.

Get ready to make this Sunday (11th September 2022) full of entertainment, lessons, and laughter with Ravivaar with Star Parivaar available to watch on Star Plus at 8 PM.

© Copyright tellybest.com, 2020, 2021. All Rights Reserved. Unauthorized use and/or duplication of any material from tellybest.com without written permission is strictly prohibited.
Cached Saved on: Saturday 1st of October 2022 09:53:24 PMCached Disp on: Monday 3rd of October 2022 07:43:08 PM