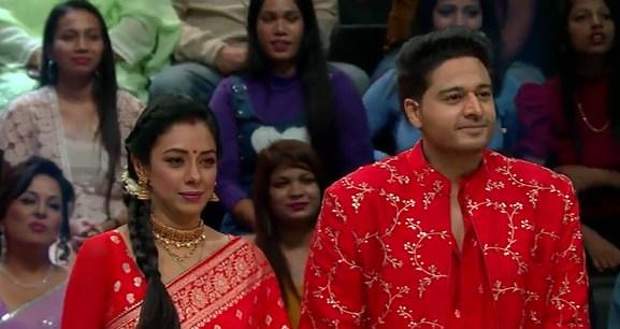 Afterwards, Arjun Bijlani and Amal Mallik welcome the audience while Arjun asks Anupama to sprinkle water on him if he faints with happiness.

Amal Mallik, explains the rules saying that among eight families there will be four competitions between two families and the winner family will be going to the final and the winner of the final round will get the chance to win a maximum of two lac rupees from Ravivaar With Star Parivaar bank.

The team has to identify a song based on the photos. It is a buzzer round. Both the teams showed great sportsmanship. Between bantering dancing and flirting the round comes to an end with the Anupama family being the winner.

This round is played between Yeh Rishta kya Kehlata Hai and Pandya Store.

The YRKKH family is supported by Anupama, Gehna and Akshara while Banni, Sai and Preesha are supporting the Pandya store.

The teams have to guess the song by the acting of a family member of Star Parivaar.

The family member is Anuj Kapadiya and Bhavani.

The round is played with enthusiasm by both the team however the team Yeh Rishta Kya Kehlata Hai wins the round.

Between the rounds, the entertainment is multiplied by the dance performances of Anupama, Akshara’s singing and Gehna’s powerful stunts, and Imlie’s cartwheeling and acrobatics.

The round is played between Ghum Hai Kisi Ke Pyaar Mein and Saath Nibhana Saathiya.

In this round, the contestant has to guess the song on the basis of jumbled words.

The enthusiastic round came to an end with Ghum Hai Kisi Ke Pyar Mein as winners.

The round is played between Yeh Hai CHahatein and Banni Chow. Dhara Anupma and Akshara support YHC and Gehna, Imlie and Sai support BCHD.

In this round, the teams have to select a family member of their choice from the board who will give them a clue which they have to guess. The round is won by the Yeh Hai Chahatein family.

In this round, the contestants have to identify the music of a song and guess the song. It is a buzzer round.

The winner of Ravivaar with Star Parivaar is Yeh Rishta Kya Kehlata Hai.

The winning team gets the chance to win prize money of 2 lacs by selecting the suitcase in the bank. Akshara selects a suitcase with 2 lacs rupees.

With this, the Ravivaar with Star Parivaar come to an end.

The latest Promo of Ravivaar with Star Parivaar (RWSP) for this Sunday 12-06-2022 looks fascinating with all the celebrities like #MaAn from Anupama, and #AryLie from Imlie, #AbhiRa from Ye Rishta Kya Kehlata Hai, etc will be seen on the show.

There are going to be competitions between the different families like Anupama Vs Imlie.

There will also be dance performances by many TV celebrities like Anuj Kapadia (Gaurav Khanna) from Anupama.

Meanwhile, there are going to be training sessions on becoming a Vamp.

The sportsmanship between the teams is commendable and there is healthy bantering and flirting to be seen between different TV characters.

The show is going to be hosted by Arjun Bijlani and Amal Mallik.

Get ready to make this Sunday (12th June 2022) full of entertainment, lessons, and laughter with Ravivaar with Star Parivaar available to watch on Star Plus at 8 PM.

© Copyright tellybest.com, 2022, 2023. All Rights Reserved. Unauthorized use and/or duplication of any material from tellybest.com without written permission is strictly prohibited.
Cached Saved on: Monday 21st of November 2022 06:40:56 PMCached Disp on: Thursday 8th of December 2022 02:49:09 AM