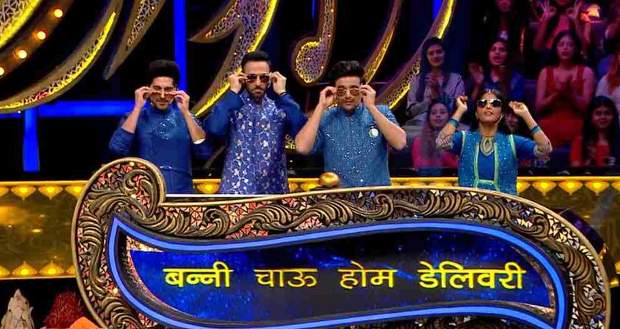 Team Banni Chow Home Delivery Yuvan and Banni enter the stage while wondering about the rest of the team BCHD arrives as Suman’s hostages. In contrast, the Pandya Store team appears on the stage after being relieved from the Tiffin Box by Yuvan and Banni.

In this round, both teams have to guess the song based on the clue the mixer machine gave. This is a buzzer round. Both the team played their best game while enjoying the game. Team Pandya Store wins the round after giving tough competition to Banni Chow Home Delivery. Dhara goes to the Ravivaar with Star Parivaar Bank and brings the suitcase worth rupees 50 thousand.

Second Round: Lucky Lakhpati Round

In this round, both teams have to guess the clues given by the family member of Ravivaar With Star Parivaar. Pandya Store and Banni Chow Home Delivery showed great zeal in playing the guessing game. Akshara from Yeh Rishta Kya Kehlata Hai gives clues to Pandya Store while Imlie gives the clues to Banni Chow Home Delivery. Between the bantering and flirting, team Pandya Store wins this round. Shiva goes to the RWSP Bank and brings a suitcase worth rupees 1 Lac.

In this round, teams have to guess the clues given from the Mukhda of the song. This is a buzzer round and in case the team gets the answer wrong then the chance will be given to another team to guess. Team Banni Chow gave tough competition to team Pandya Store but the round is won by Pandya Store. Ravi goes to the RWSP bank and brings the suitcase worth rupees 2 lacs.

After registering the win in the last round and winning 2 lac rupees, Team Pandya Store won the episode and earned rupees 3.5 lacs of the total money.

The latest Promo of Ravivaar with Star Parivaar (RWSP) for this Sunday 17-07-2022 is a treat for Pandya store and Banni Chow Home Delivery family fans as both the families will give tough competition to each other this Sunday.

Banni will sharpen her claws on Dhara and warns her to be ready to lose.

Dhara will propose to Gombi and dance with him turning the atmosphere romantic.

This week’s promo showcases Akshara as Khilji and Imlie’s sizzling dance performance as Monjulika which will leave the audience breathless seeing their energy.

At the same time, someone dressed as Sunheri will flirt with Suman Pandya and will get a very spicy rebuke that will tickle the viewers.

Besides that, there are many more fun performances awaiting you this Sunday by the Pandya Store family and Banni Chow Home Delivery family of Starplus.

Get ready to make this Sunday (17th July 2022) full of entertainment, lessons, and laughter with Ravivaar with Star Parivaar available to watch on Star Plus at 8 PM.