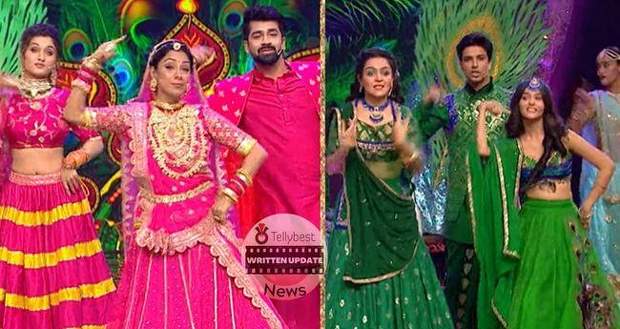 Episode 10 of Ravivaar with Star Parivaar begins with the celebration of Janmashtmi by Yeh Rishta kya Kehlata hai, Anupama and Pandya store Parivaar. Little Anu from Anupama is playing the role of Lord Krishna on stage.

Arjun and Amal come to the stage taking blessings from child lord Krishna and welcoming everyone to Janmashtmi's special episode of Ravivaar With Star Parivaar.

This time the competition is between three teams. In this round, the Melody of the sound will be played that is unique to the song. The teams have to guess the song by pressing the buzzer.

All the teams participated enthusiastically in this round. Team Anupama win the round and got the chance to go to RWSP bank. Kinjal goes to the bank and brings a suitcase with rupees 50 thousand.

After that, Krishna’s of all three parivaars raced with each other to bring Maakhan Matki’s to Krishna Ji. Shiva of Pandya store wins the race.

Arjun gives the opportunity to Shiva to properly propose Ravi on stage.

Shiva and Ravi turn the atmosphere romantic and Shiva proposes to Raavi.

In this round, all the teams have to guess the song by the clues given to them by their family member. Manish from YRKKH, Anuj from Anupama and Debraj from BCHD comes to give clues to the Pandya Store team. Debraj flirts with Suman shamelessly while Suman beautiful dodges his advances. Team Anupama wins the round and earns the chance to go to Ravivaar With Star Parivaar bank. Anupama goes to the RWSP bank and brings a suitcase of rupees 1 lac.

Later, Arjun plays video messages for Anupama from the different parivaars and turns the atmosphere emotional. Anupama becomes overwhelmed to hear the love messages from her reel life family.

Paritosh shares how Anupama was the pillar of strength after the demise of his father while Anupama reciprocated the feeling of love they share and how Ravivaar With Star Parivaar has given them the opportunity to come close with other Parivaars also.

Afterwards, Anupama’s real son comes to Ravivaar With Star Parivaar and reveals the inside story of Anupama’s real life and entertains the audience with his tales.

Later, Raavi introduces Rajjo and Arjun to the PArivaar as new members of the Star Parivaar family.

In this round, Teams have to guess the songs based on the word clues given on the screen. To add the Janmashtimi flavour to the round, the team will fight to find Basuri in a Matki instead of pressing the buzzer. Team YRKKH wins the round and earns the chance to go to the Ravivaar With Star Parivaar bank. Akshara goes to RWSP bank and wins the episode by bringing a suitcase of rupees 2 lacs.

Star Plus family TV Show Ravivaar with Star Parivaar is a very delightful show designed to keep the Star Plus viewers engaged on Sunday evenings.

This TV show is an amalgamation of all-Star Plus shows cast where all your favourite stars will come under one roof and amuse you in various ways.

The competition will take place between Anupama and Yeh Rishta Kya Kehlata Hai while Shiva and Ravi will also appear as guests.

This week’s promo will showcase A Makhan race between the Krishna’s of both team with Manjari playing Yashodha Maiyya.

At the same time, Shiva and Ravi’s romantic performance will turn the atmosphere romantic while Anupama blesses the couple.

Adding emotions to the episode, Paritosh will share their offscreen mother-son relationship with Anupama and how she was the pillar of strength for him after his father passed away.

The show will take a humorous turn when Anupama’s real son come on stage and expose her housekeeping skill to the world.

Get ready to make this Sunday (21 August 2022) full of entertainment, lessons, and laughter with Ravivaar with Star Parivaar available to watch on Star Plus at 8 PM.