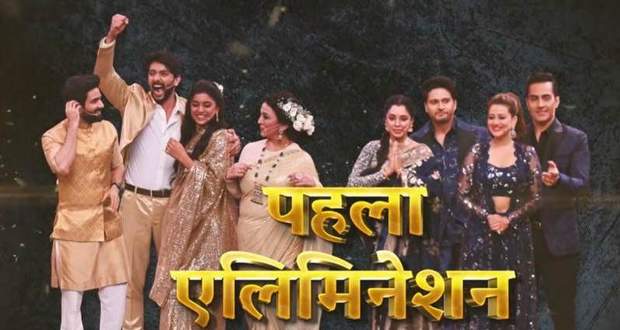 RWSP starts with all eight teams appearing on stage one by one. Arjun and Amal welcome everyone to the stage of RWSP.

Amal tells everyone about the turn that this game show is about to take from today. He explains that today anyone Parivaar will be eliminated in the end.

Arjun tells that four-four teams will first compete with each other and the last two teams with the least score will go into the elimination round and fight to stand in the game. However, one team will be eliminated in the end.

All the team shows great enthusiasm and in their unique style raised the flag of their family assuring a win.

After a while, Arjun announces the first four families that will play the game first. Arjun also explains to them that there is no RWSP bank today and only team talent will make them a winner or loser.

In this round, the team has to guess the song based on the three pictures shown as clues. If the Parivaar fails to answer or gives a wrong answer after pressing the buzzer then that Parivaar will go to the elimination round. If the Parivaar gives the right answer then they will be safe.

The next team that saves themselves from Elimination is Saath Nibhana Saathiya.

The next team that saves themselves is Ghum Hai Kisi Ke Pyaar Mein while Pandya Store qualifies for the Elimination round.

With a huge round of applause, the show moves to the next round.

Arjun reminds Amal of the hidden talent showcased in previous episodes by Bahu and Saas. Later, Arjun invites the boys of Parivaars to showcase their talent.

Aryan entertained the audience with his gymnastic abilities whereas Virat shows terrific dance moves and lit the stage with a scintillating performance.

Next comes Vanraj who challenges every male actor of all Parivaar to arm-wrestle with him and defeat him within 3 seconds.

Yuvaan, Rudrakhsh, Sikander, Aryan, Shiva and Yuvraj all got defeated within a second while Yuvraj from Imlie prove to be a strong contender.

After wonderful performances of the male leads of the Parivaars, the next four teams come forward to fight for their place in the next episode.

In this round, Team YRKKH, BCHD, Imlie and YHC will have to identify the clues and guess the song. Yeh Rishta Kya Kehlata Hai parivaar saves themselves first.

The next Parivaar to save themselves is Imlie.

The next team to save themselves is Banni Chow Home Delivery while Yeh Hai Chahatein goes to the Elimination round.

Arjun and Amaal ask the star couples of all Parivaar to showcase their romance with the props given to them.

Imlie and Aryan end up with cloth washing props and beautifully perform the challenge.

The next couple is Vanraj and Kavya who gives new meaning to the romance using toilet paper.

After the exemplary performance comes SaiRat. Sairat is presented with Jhadu (broom) as a prop to propose Sai.

Afterwards, Rudrakhsh and Preesha come on stage to romance using a toilet brush as a prop. Doing justice to their props, Preesha and Rudra lit the stage.

Anuj and Anupama burnt the stage with their hot performance using Chappal as a prop.

The Round is played between Pandya Store and Yeh Hai Chahatein parivaar.

So far the Parivaars were playing the game to win the money but from this Sunday they will have to put more effort into winning the competition as the loser team will be eliminated from the game.

This week’s promo showcases the heroes of Star Parivaar unveiling their hidden talent. This week the competition will be between team Anupama and team Imlie.

At the same time, Vanraj will challenge all the Star Parivaar heroes in a handfasting competition just for 3 seconds.

Besides that, there are many more fun performances awaiting you this Sunday by the Star Parivaar families while one family will leave the game forever.

Get ready to make this Sunday (24 July 2022) full of entertainment, lessons, and laughter with Ravivaar with Star Parivaar available to watch on Star Plus at 8 PM.

© Copyright tellybest.com, 2020, 2021. All Rights Reserved. Unauthorized use and/or duplication of any material from tellybest.com without written permission is strictly prohibited.
Cached Saved on: Sunday 2nd of October 2022 05:05:32 AMCached Disp on: Thursday 6th of October 2022 04:09:08 PM