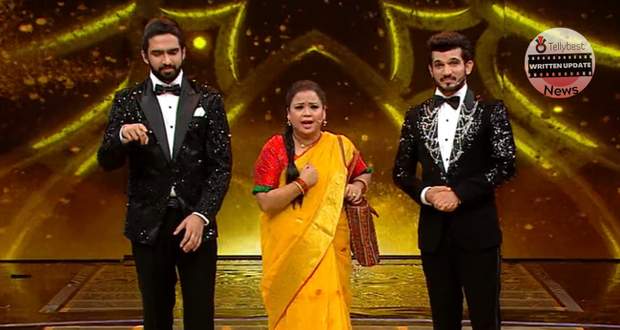 The Grand Finale episode of Ravivaar With Star Parivaar begins with all the teams singing Qawwali “Hai Aj Finale Mast Mast” with Amaal and Arjun.

Arjun unveils the Ravivaar With Star Parivaar Winner trophy and asks all teams why they think they will win.

In this round, Banni chow Home Delivery and Imlie Parivaar participate in this round. In this round, both teams have to guess the song based on the pictures shown on the juggler board. The winner of this round will go directly to the final round. Team Imlie wins the round and gets qualified for the Final round.

Afterwards, kids of Star Parivaar enter the stage dressed as Saas of Star Parivaar. They entertained the audience by mimicking the famous Saas dialogues and welcoming Saas on stage for their fantabulous performances.

Neela performs in the song “Dum Maro Dum” followed by Leela’s performance in the song “Piya Tu Ab To Aaja”. After Leela comes Manjari, performing on “Ek Do Teen” and then comes Bhavani dancing to the tunes of “Hawa Hawai”. These glorious performances lit the stage while Bahuein appreciates their Saas.

After that Bharti Singh comes on stage dressed as Anupama and calls herself “Asli Anupama”. Bharti's comic timings and punches fill the audience with uncontrollable laughter while Harsh Limbachiya acts as Vanraj.

After the musical performance, Imlie comes to ask the audience to give their love to the next generation of Imlie and introduces Choti Imlie.

After a while, Mamaji comes on stage dressed as Dulha dancing on  “Aaj Mere Yaar Ki Shadi Hai”. Arjun tells Mama Ji that today he has arranged a Swayamwar for him so that his bachelorhood can come to an end with this season.

Afterwards, Virat calls Usha Mausi to introduce her to Mama Ji and they both like each other but Baa stands against the relationship.

Later, Anuj, Rudrakhsh and Yuvaan welcome the on-stage performances of Bahus. Imlie, Preesha, Banni and Anupama lit the stage with their fantastic performance.

A mock round is played between Saas and Pati of Star Parivar where Anuj came dressed as DDLJ’s Kajol to give clues. Team saas won the round and wins rupees one lac.

In this round, Anupama and Pandya Store will participate and will have to guess the song based on the word clues given on the board. It is the buzzer round and the winning team will go to the final round. Team Anupama won the round and get qualified for the final round.

On the last Ravivaar, Arjun Bijlani expresses his love and longingness for a family and how he feels a part of it whenever he is on the RWSP set and sings a song “Yaaron Dosti Badi Haseen Hai” for all the love he has received being a part of this journey.

Later, Anupama also shares her feeling about the show and making friends with other actors of the parivaar while Imlie also thanks everyone for all the love she has received as part of this journey of RWSP.

This round is played between three finalists Yeh Rishta kya Kehlata Hai, Anupama and Imlie.  In this round, teams have to guess the song on the basis of the melody of the song. Team Yeh Rishta Kya Kehlata hai wins the round as well as Ravivaar With Star Parivaar trophy and prize money of 10 lac rupees.

With this Season 1 of Ravivaar With Star Parivaar comes to an end.

Star Plus family TV Show Ravivaar with Star Parivaar which is designed to keep the Star Plus viewers engaged on Sunday evenings has finally reached its final episode of season 1.

In this show, stars of different Parivaars came together to entertain you and fill your Sunday with laughter. This family show also showcased various tidbits of Star's personal lives and made you feel more connected to them.

The latest Promo of Ravivaar with Star Parivaar (RWSP) for this Sunday 25-09-2022 Grand Finale week is full of entertainment and outstanding performances from all Star celebrities.

This week’s promo showcases Bharti Singh and Harsh Limbachiyaa adding to the laughter marathon with their quick wit and anecdotes. Bharti will also mimic Anupama and twists her serious dialogues into funny ones.

The Finale will take a finger-chewing moment when the teams will compete to win the Best Star Parivar trophy of the season.

At the same time, the Bahuyein of the Star Parivaars will light the stage with their scintillating performances while mothers-in-law will not stay behind.

Besides that, many more fun performances awaiting you this Sunday by the Star Parivaar families.

Get ready to make this Sunday (25th September 2022) full of entertainment, lessons, and laughter with Ravivaar with Star Parivaar available to watch on Star Plus at 8 PM. 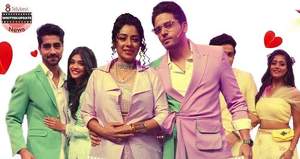