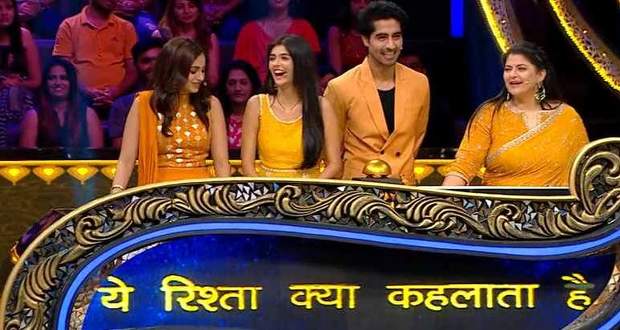 Episode 3 of Ravivaar with Star Parivaar (RWSP) starts with team Imlie coming to the stage dancing to the tunes of “Pinjre wali Muniya”.

Afterwards, team Yeh Rishta Kya Kehlata Hai enters the stage while Arjun tells them that Imlie Parivar thinks that the YRKKH team is afraid of them.

Mahima tells them that the word fear is not in their dictionary but they can assume all they want.

After a while, Amal Malik announced that the team who will win the maximum prize money at the end of all rounds will be the winner of the episode.

In this round, the teams have to guess the song based on the picture clues shown in the slot machine. This is a buzzer round.

Both the team gives tough competition to each other. Team Imlie won the round and earned the chance to select a suitcase from the bank. Neela goes to the Bank and selected a suitcase worth Rs 500.

In this round, the contestants have to guess the song based on the clues given to them by their family members. Manish from YRKKH and Narmada From Imlie comes to give the clues. After guessing song after song, team Imle won the round and Imlie goes to the bank and selected a suitcase worth Rs one lac.

In this round, the contestants have to sing the song based on the lyrics on the board. At some point, some words in the lyrics will disappear but the contestant will have to continue to sing the correct song. They will be given a special mike which will spray water on them if the lyrics go wrong. This interesting round kept showering the contestant with water. However, team Yeh Rishta Kya Kehlata Hai won the round. Abhimanyu goes to select the suitcase from the bank and selected a suitcase worth Rs five hundred.

The latest Promo of Ravivaar with Star Parivaar (RWSP) for this Sunday 26-06-2022 looks fascinating with the cast of Yeh Rishta Kya Kehlata Hai and the cast of Imlie looking gorgeous and ready to give tough competition to each other.

This week’s promo also reveals how Akshara will propose to Abhimanyu in Abhimanyu style while the rest of the cast of YRKKH hoots for them.

At the same time, Arjun asks Imlie about having feelings for Aryan in real life too.

Besides that, there are many more fun performances awaiting you on this Sunday by the team of YRKKH and Imlie.

Get ready to make this Sunday (26th June 2022) full of entertainment, lessons, and laughter with Ravivaar with Star Parivaar available to watch on Star Plus at 8 PM.

© Copyright tellybest.com, 2022, 2023. All Rights Reserved. Unauthorized use and/or duplication of any material from tellybest.com without written permission is strictly prohibited.
Cached Saved on: Wednesday 25th of January 2023 09:56:50 AMCached Disp on: Sunday 5th of February 2023 12:51:05 PM