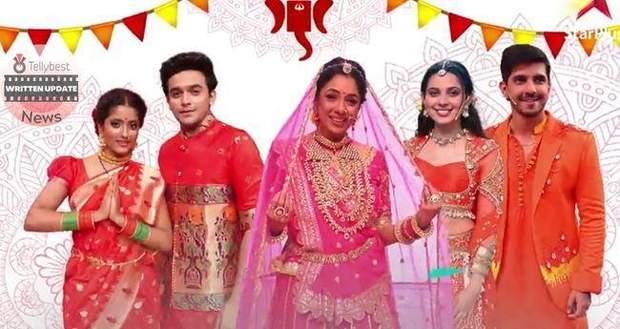 Episode 12 of Ravivaar with Star Parivar starts with Arjun and Amal welcoming the audience and telling the importance of Ganesh Chaturthi and why this is an auspicious day for RWSP.

Later, Virat brings Lord Ganesha’s idol on the stage along with Bhavani and Patralekha and installs it on the RWSP stage’s temple.

Afterwards, they prayed and performs a dance on Sri Ganesha Deva while other participating members also joins them.

Later, Arjun and Aamal also go to take blessings from the Lord Ganesha.

The competition will be between Bavani Mandali and Virat Mandali.

After that Arjun invites Govinda and Sunita to grace the stage of Ravivaar With Star Parivaar.

Govinda and Sunita enter the stage by taking the blessing of Lord Ganesha.

Arjun is pleased to see Govinda and Sunita on the stage and asks Govind what it means for them to celebrate the Ganesha festival. Sunita tells them that this time is most auspicious for them and they invite people into their home to celebrate.

Team Virat Mandali is in full form and wins the round despite the tough competition given to them by team Bhavani. Govinda accuses Patralekha of playing for other teams. Between the bantering, Sunita goes to Ravivaar with Star Parivaar Bank and brings a suitcase worth Rs 0.

Afterwards, Arjun invites Anupama on stage to meet Govinda and Sunita who joins Virat Mandali to play the game.

Later, Virat and Govinda dance together lighting the stage with their fantastic performances.

Meanwhile, Shiva gets emotional trying to express his love and respect for Govinda and says that there is no one like Govinda.

Virat also shares his career moment when his dance master told him to dance like Govinda and then he will be the best dancer.

In this round, teams have to guess the song enacted by one of their own family members. Imli came to the stage performing Govinda’s song to give hint to team Bhavani. While Anuj also joins the stage to challenge Imlie in being a better fan of Govinda.

Between the dance and music round two comes to end with team Virat winning the round.

Anupama from team Virat goes to RWSP bank and brings a suitcase worth rupees 0.

After a while, Anupama and Anuj performed on the song Ankhiyon se goli Maare that is also special for serial Anupama.

Leela and Neela request Govind to say their special line of the serial in which Govinda adds his humour and entertains the audience like never before.

Third round: Final Round

Between the jokes and laughter, team Bhavani wins the round and Govinda goes to RWSP bank and brings a suitcase worth rupees 2 lac.

Team Bhavani wins the round as well as the episode with the prize money of Rs 2 lacs.

This TV show is an amalgamation of all-Star Plus shows cast where all your favourite stars will come under one roof and entertain you in various ways.

The latest Promo of Ravivaar with Star Parivaar (RWSP) for this Sunday 28-08-2022 full of entertainment as Ganesh Chathurthi will be celebrated on the RWSP stage with GHKKPM taking the main role.

Not only that the entertainment graph will be at its peak because Govinda and his wife Sunita will be gracing the show with their presence and celebrate Ganesh Chaturthi as well.

The competition will take place between Virat Mandli and Bhavani Mandli.

No one can remain serious when Govinda is around neither can you stop laughing.

This week’s promo will showcase Anuj and Imlie competing to impress Govinda by impersonating Govinda.

Govinda will also showcase some of his skills that make him a hard act to follow.

At the same time, Govinda and Sunita banter with each other while supporting opposite teams.

Get ready to make this Sunday (28th August 2022) full of entertainment, lessons, and laughter with Ravivaar with Star Parivaar available to watch on Star Plus at 8 PM.

© Copyright tellybest.com, 2020, 2021. All Rights Reserved. Unauthorized use and/or duplication of any material from tellybest.com without written permission is strictly prohibited.
Cached Saved on: Friday 30th of September 2022 05:05:24 PMCached Disp on: Saturday 1st of October 2022 12:25:35 AM