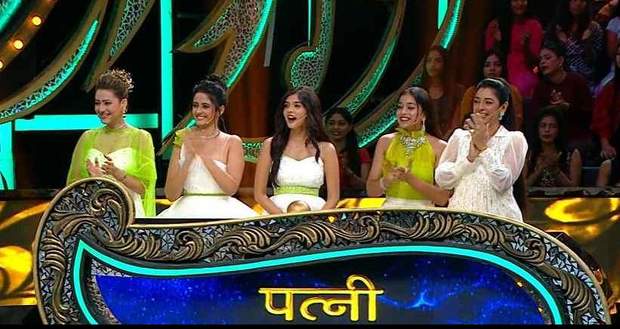 Ravivaar with star Parivaar starts with Arjun bijlani and Amal welcoming the audience to Ravivaar with Star Parivaar Pati Vs Patni episode. Both the teams play a tug of war and make the team Pati fall.

Both the teams have come prepared and are ready to let the other team down with grace.

Arjun invites Harsh and Bharti to the stage to give clues in the first round.

Team Patni guessed both the songs and so does Team Pati ending with a tie.

Anupama shows her wrath on Anuj for guessing the song in the last three seconds.

After a tie-breaker round, Team Patni guessed the song right and wins the round.

Bharti and Harsh crack jokes on Akshara being lightweight.  Imlie from team Patni goes to the Ravivaar with star Parivaar bank and brings rupees 500. Imlie takes out her anger on Aryan and beats him with hockey while Anuj mocks her for getting rupees 500 only.

Bharti and Harsh re-enter the stage and joke about Anupama and Anuj and call Imli and Aryan a herbal cure to gastric problems.

In this round, the music of a song will be played and both the teams have to guess the song. This is a buzzer round. Team Patni wins this round and defeated team Pati. Bharti urges Abhimanyu to show his abs. Aryan also shows his abs to the audience while Bharti dances with both the dashing well built patis.  Akshara from team Patni goes to the Ravivaar with Star Parivaar bank and brings nothing.

Arjun and Amal challenges patis to take kitchen challenge. Sai and Virat will chop the vegetables, Aryan and Imlie will knead the dough while Vanraj and Kavya will make Rotis.

It seems team Patis will win this challenge but ultimately Patnis defeats the Patis in the challenge.

Patis also challenges Patnis to lift them as they do when they are about to fall.

Patnis performs the tasks with zeal but only a few could do the task and wins the task.

In this round, some clues will be given on the screen which the teams have to guess after pressing the buzzer.

After the tough competition, team Patni again wins the round while patis did not get the chance t go to the Ravivaar with Star Parivaar bank. Bharti from team Patni goes to the bank and brings a bag of 2 lacs.

Star Plus has brought another family TV show to keep the Star Plus viewers entertained on Sunday evening.

This new TV show is an amalgamation of all-Star Plus shows cast where all your favourite stars come under one roof and entertain you in various ways.

The latest Promo of Ravivaar with Star Parivaar (RWSP) for this Sunday 31-07-2022 is going to be full of laughter as the competition is between Patis VS Patnis.

To make the episode more interesting, laughter sensation Bharti and her husband Harsh will grace the show with their presence and cracks bombastic jokes.

So far Parivaar was playing the game to win the money but from this Sunday they will have to put more effort into winning the competition as the loser team will be eliminated from the game.

This week’s promo will showcase the wives challenging their husbands in every way and wittingly winning from them.

At the same time, Bharti and Harsh will show a glimpse of their couple fights that shuts everyone around.

Get ready to make this Sunday (31 July 2022) full of entertainment, lessons, and laughter with Ravivaar with Star Parivaar available to watch on Star Plus at 8 PM.