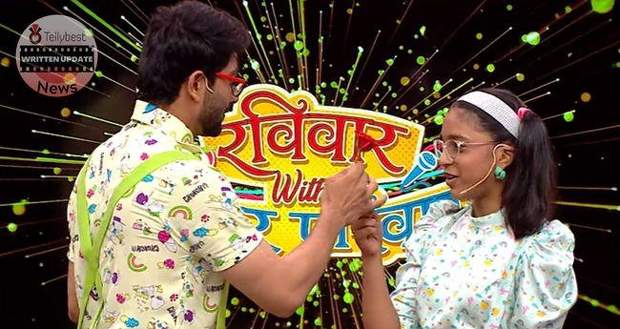 Episode 13 of Ravivaar with Star Parivaar starts with Arjun and Amaan introducing the importance of Bachpan and inviting both the girls and boys team who have reached into their Bachpan.

Both the team performs the song “Galti Se Mistake”. Both teams are geared up to win the round and to prove one is better than the other.

In this round, the teams have to observe the clue on the Mixer Baba. For today's episode, one of the clues will be colour to identify the song. Arjun and Amaal are the teacher of the class and tasks Aryan to present the rose to Imlie with love.

Between the bantering and teasing the round comes to an end with the boys' team winning the round. Mama Ji flirts with Rakhi Ji and goes to RWSP bank and brings the suitcase worth rupees 500.

After the round, Arjun and Amaal open secrets of the childhood of the stars of Star Parivaar. Aryan shares his childhood experience when he was taken to the police station for punching the boy.

Afterwards, Arjun introduces Aryan’s parents via video call and teases them with meaningful comments. Aryan also shares her mother’s patient servitude during his difficult childhood and his father’s teachings that made him the person he is today.

Imlie’s Uncle tells the change Imlie undergoes after her mother’s death and has defeated the pain of her life.

After a while, Neela’s childhood exploits are bright to light. Later,  Neela’s husband arrives on stage. Neela tells the audience about the love at first sight that his husband experienced during her sister's wedding.

Leela’s husband sings a beautiful song for Leela and confessed his love for her again.

The show moves on to the next round.

In this round, teams have to guess the song given based on the clues of their family members.

Dhara came to stage dancing on the song “Tujhe to Maine Dekha”. Aryan gives Teacher Dhara I love note while Gombi comes to Dhara’s rescue. Between the flirting and teasing the round progress while Dhara gives clues to the girl's team. To give clue to the boy's team Shiva appears on stage dressed as a joker performing on “Bum Bum Bole Masti Mein Dole”.Team boys lose the round making the girl's teams the winner. Imlie goes to RWSP bank and brings the suitcase worth Rupees one Lac.

Arjun makes the boys do sit up and make them Murga for losing the round.

After a while, the star's childhood pics are shown on the screen and they are asked to guess the star.

Yuvaan is made to dress like his childhood photo where her parents dressed him as a girl.

Imlie’s pic is also shown where she is dressed as Mehmood. Mama Ji’s pic came next and he gets the chance to flirt with Rakhi. Aryan was also dressed as a girl which Imlie identified immediately giving Arjun a chance to tease them again.

Both the teams participated enthusiastically and gives tough competition to other teams. Team boys win the round defeating the girls. Aryan goes to Ravivaar bank and brings the suitcase worth rupees 2 lacs.

With this suitcase, the team boys become the winners of the show by earning rupees 2 lac five hundred.

This TV show is an amalgamation of all-Star Plus shows cast where all your favourite stars will come under one roof and entertain you in various ways.

The latest Promo of Ravivaar with Star Parivaar (RWSP) for this Sunday 04-09-2022 is very entertaining with all the RWSP members dressed as children and looking cute.

Not only that the entertainment graph will be at its peak because the competition will take place between Young Girls and Young boys.

There will be a reliving of young love when Aryan propose to Imlie. The comic element will be added when Aryan's real mother calls him and Imlie cute like siblings.

This week’s promo will showcase Dhara dressed as a hot teacher and Gombi developing a crush on her.

At the same time, Shiva will rock the stage with his performance as a joker.

There will be a lot of fight between boys and girls about who is smart and who only pretend to be smart.

Get ready to make this Sunday (4 September 2022) full of entertainment, lessons, and laughter with Ravivaar with Star Parivaar available to watch on Star Plus at 8 PM.

© Copyright tellybest.com, 2020, 2021. All Rights Reserved. Unauthorized use and/or duplication of any material from tellybest.com without written permission is strictly prohibited.
Cached Saved on: Saturday 1st of October 2022 09:08:37 PMCached Disp on: Monday 3rd of October 2022 07:39:15 PM