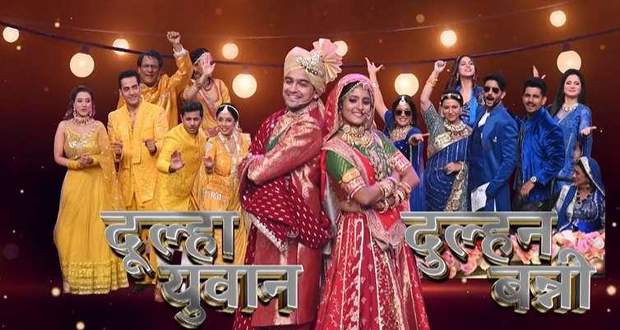 Today is a grand celebration of Banni and Yuvaan's marriage. Team Ladke Waale has Anupama and GHKKP Parivar while Team Ladki Waale consists of Imlie and Pandya Store Parivar.

Anupama welcomes the couple by doing Aarti and then performing the Grah Pravesh rituals.

After the Grah Pravesh, Arjun seats Banni and Yuvaan in their place and a war to win the Shagun begins between Ladki Wale and Ladke Waale.

In this buzzer round, team Ladki Waale and Ladke Waale have to guess the song by listening to and recognising the music. Between the bantering and teasing, team Ladki Waale wins the round and Imlie is sent to Ravivaar With Star Parivaar Bank to select a suitcase. While Imlie selects the suitcase both the teams try to get one-upmanship over each other. Imlie selects the suitcase worth rupees 50 thousand.

Arjun and Amaal ask Yuvaan to Propose Banni as he hasn’t done it till now. Yuvaan recites very beautiful poetry to honour Banni and proposes to her and presents her with the moon. Banni also promises to make delicious food for him throughout her life and confesses her love for him.

After that, the newlyweds slow dance to the song “Mujhko Hai Tujhse Raabta”.

In this round both the teams have to guess the songs based on the clues given by respective family members. It is not a buzzer round and the team with the maximum guess will win the round.

After the round, Arjun request Mamaji dressed as Salmaan Khan and Rakhi Dave dressed as Madhuri Dixit to recreate the flower and Gulel moment from Hum Apke Hain Kaun. After that Mama JI and Rakhi performed the song “Pehla Pehla Pyaar Hai” However Pyaar was all from MamaJI’s side.

After that Debraj also flirts with Suman and recites poetry for her and gets a sizzling come back from Suman.

Seeing romance in the air Anupama wishes for Anuj to propose to her again on the stage. Anuj fulfils Anupama’s wish in Anuj's style and makes her happy. Anupama also sings “Dil Ne Ye Kaha Hai Dil Se” for Anuj. Anuj requests another song from Anupama as she is a fantastic singer. Anupama complies with Anuj’s wish by singing “Aapki Nazron Ne Samja”.

In this round, both teams will have to guess the song based on the word clues given on the screen. To add the wedding flavour to the round, a game to search the ring is added to the round. Banni finds the ring first and predicts winning the round.

After guessing the song right, Shiva and Vanraaj also play the ring game and Vanraj wins it this time.  Later, Virat and Imlie also play the ring game and this time Imlie wins the ring. While Ladke Waale remains at zero, Ladki Waale wins this round too. Raavi goes to The Star Parivaar bank and brings a suitcase worth rupees 2 lacs and wins the show.

Star Plus family TV Show Ravivaar with Star Parivaar is a very entertaining show designed to keep the Star Plus viewers entertained on Sunday evenings.

This TV show is an amalgamation of all-Star Plus shows cast where all your favourite stars will come under one roof and amuse you in various ways.

The latest Promo of Ravivaar with Star Parivaar (RWSP) for this Sunday 07-08-2022 full of entertainment as Banni and Yuvaan will get married on the show’s platform while the cast of Anupama and GHKKPM  act as Ladke Wale and cast of Imlie and Pandya Store will act as Ladkiwale.

This Sunday the Parivaar will play the game to win the money and have a gala time celebrating Yuvaan and Banni's marriage.

This week’s promo will showcase ladke wale challenging ladki wale during the battle.

At the same time, Anupama will welcome the married couple by doing Aarti and performing the rituals of Grahpravesh.

Bani and Yuvan will also play the game of finding the ring in the water pot and Banni will win it.

Anuj and Virat lits the stage with their dance performance and Imlie accepts the challenge from Ladki wale's side.

Get ready to make this Sunday (7th August 2022) full of entertainment, lessons, and laughter with Ravivaar with Star Parivaar available to watch on Star Plus at 8 PM.

© Copyright tellybest.com, 2022, 2023. All Rights Reserved. Unauthorized use and/or duplication of any material from tellybest.com without written permission is strictly prohibited.
Cached Saved on: Monday 21st of November 2022 02:54:02 AMCached Disp on: Thursday 1st of December 2022 10:42:08 PM