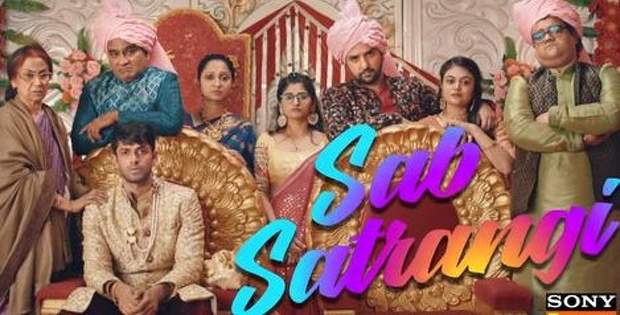 Sab Satrangi is an upcoming rom-com serial on the Sony Sab TV channel.

The serial is being made under the banner of Parin Multimedia by the producer Saurabh Tewari.

Actors Mohit Kumar and Kangan Baruah Nangia are playing the leading roles of the characters Mankameshwar Maurya aka Manu and Gargi.

The release (start) date of the serial is 7th February 2022.

Sources tell us that the serial may replace the current ongoing serial Tera Yaar Hoon Main on the channel.

Sab Satrangi promo of the serial has been officially released which gives a sneak peek into the life of the protagonist Manu Maurya and his family.

The plot of the serial Sab Satrangi is set in the city Lucknow of India. The story of the serial revolves around Mankameshwar Maurya and his family members.

Mankameshwar Maurya, also known as Manu, the role played by Mohit Kumar, is a sweet and innocent guy who believes in his grandmother’s philosophy of goodness, that is if you do good to others, others do good to you.

In the promo of the serial, Manu is helping others in his wedding preparations. Whether it is catering or providing a cylinder or being an electrician, Manu does it all.

Manu is marrying a girl named Shweta. Later on, after the wedding, Manu goes into his room to celebrate his wedding night with his newly wedded wife.

Manu lifts the veil to see his wife’s face but gets surprised.

Also, there is another protagonist, Gargi, the role played by Kangan Baruah Nangia, who is very outspoken and a family person.

Manu’s grandmother is an insurance agent who is very bold unlike other women of her age.

Manu’s father is a magician who tries to entertain the public through his magic tricks.

There are other members in the family as well and all have their different personalities just like the different colors in a rainbow, leading to the name of the serial ‘Sab Satrangi’.

Tune in to Sony Sab or Sony Liv app to know more about Manu and his family and also why he gets surprised after lifting the veil of his wife’s face.

Q1 Where can I watch the serial Sab Satrangi?

A1 You can watch the serial on channel Sony Sab or the OTT platform Sony Liv.

Q2 Who is playing the lead role of Manu in the serial Sab Satrangi?

A2 Mohit Kumar is playing the leading role of Manu in the serial Sab Satrangi.

Q3 What is the release date of the serial Sab Satrangi?

Q4 Who is the producer of the serial Sab Satrangi?

A4 Saurabh Tewari is the producer of the serial Sab Satrangi.

© Copyright tellybest.com, 2022, 2023. All Rights Reserved. Unauthorized use and/or duplication of any material from tellybest.com without written permission is strictly prohibited.
Cached Saved on: Monday 21st of November 2022 03:59:08 AMCached Disp on: Monday 5th of December 2022 12:55:23 PM