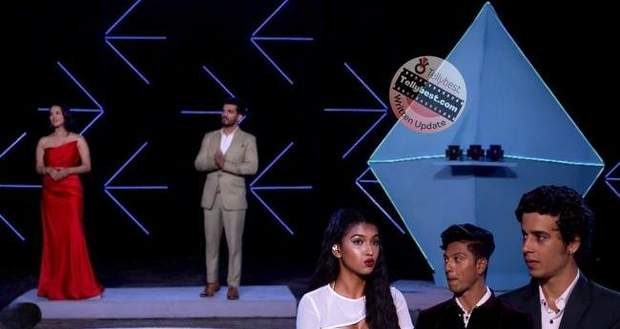 Aradhana messes up the task

Sunny and Arjun explain the task in which two trios have to form an alliance with each other and perform as a group of six.

Two girls will bring water socked in the sponges tied to their waists from the sea while two other girls will transfer that collected water to a cylinder to get the ball out.

However, as Joshua-Justin's group comes to perform, Aradhana messes up the whole task by not being able to pour the water inside the cylindrical container containing the ball.

With the incompletion of Joshua-Justin's group, Hamid-Amir's group automatically become the winner and gets safe from the dumping session.

Urfi revealed as the mischief-maker

The dumping session begins with all the boys and girls standing in the unsafe zone except the six safe contestants.

Arjun and Sunny introduce the oracle cards to the contestants and ask the unsafe members to choose a card among the ones placed there.

Joshua and Kashish decide to open the oracle cards and choose the red card.

Everyone writes the trio's name they want to have the dumping power while Sunny informs everyone that there will be two eliminations today.

The safe contestants are asked to exercise their power and write the names of one girl and one boy whom they want to dump on that night.

The unsafe members choose Amir, Pema, and Shrea to be the trio exercising the power who write the names of Sohail and Soumya on their placards.

However, Sunny and Arjun decide to pick the Oracle card that Joshua-Kashish had chosen and announce that there is a mischief-maker among them.

Urfi Javed steps up as the mischief maker and gets the power to save one person among Sohail and Soumya.

Without any hesitation, Urfi saves Sohail and dumps Soumya.

Urfi also bids goodbye to Kashish as she had come to the show as only a mischief-maker and not as a contestant.

The latest promo for this weekend's Splitsvilla 14 (10 December 2022) shows a new twist arriving in the Splitsvilla islands in the form of three new wildcards.

The boys are shocked to see new girls arriving and get a chance to spend time with them.

Another promo for this weekend's Splitsvilla X4 (10-12-2022) shows the dumping session in progress with shocking twists and turns.

Sunny introduces the oracle cards concept and announces that the oracle can change the course of the show anytime.

© Copyright tellybest.com, 2022, 2023. All Rights Reserved. Unauthorized use and/or duplication of any material from tellybest.com without written permission is strictly prohibited.
Cached Saved on: Wednesday 25th of January 2023 07:23:49 PMCached Disp on: Thursday 2nd of February 2023 08:47:46 PM