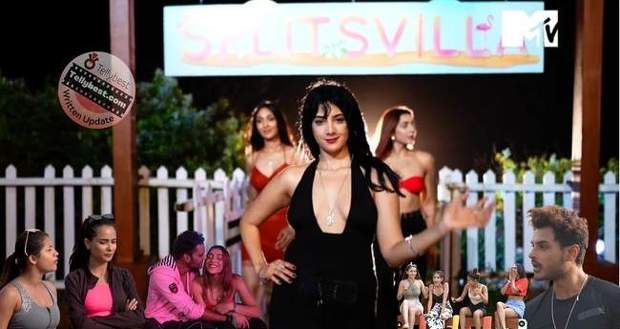 Today's 11th December 2022 Splitsvilla 14 episode starts with the boys sending a letter of love containing all their feelings towards their connections.

The Isle of mars starts to palpitate with verses of poetry and handmade gifts.

Boys send a box containing letters for every girl except Aradhana.

In the Isle of Venus, the girls read the letter with great vigour and roast their letters.

Some find the letters cringy and romantic and some start to miss their connections who live on the other side of the ocean.

Wildcards enter the Isle of Mars

Aagaz Akhtar recognises Hiba Trabelssi as his best friend and regrets sending the letter to Sakshi Dwivedi in the morning.

The boys dance for the girls and try to know the new wild card entries.

Joshua and Justin flirt with Mehak but Kashish Thakur takes her aside as he desperately needs a connection.

On the other hand, Hiba is surrounded by other guys and Justin dances with her while Sohail takes off his shirt for her.

Meanwhile, Joshua flirts with Mehak Sembhy and he proposes to her while playing a game.

Later, Kashish emotionally confesses his feelings to Mehak and kisses her when she demands one and he blushes furiously after experiencing the romantic moment.

Afterwards, a scroll arrives which announces the news of girls staying the night at the Isle of Mars and makes the boys dance out of happiness.

The Girls find out the truth!

The next morning, the girls watch the boys mingling with the wildcards on a screen and feel betrayed.

The girls feel betrayed when their connections flip and decide to break up with them.

Only Hamid was the only one who didn’t flip and Soundous dances in happiness as she has chosen a loyal person.

Later, Sakshi Shrivas tore Justin’s letter into pieces and flushed it in the toilet.

Afterwards, the girls go for their next task and meet Sunny Leone at the locations and roast their connections for their unloyalty.

At the same time, the boys enter with the wild cards and Sunny Leone asks about the wildcards experience.

Later, Sunny Leone drops the bomb telling the boys that the girls saw everything that they did at the night with the wildcards.

Sakshi Shrivas confronts Justin but he keeps quiet and bows his head in shame.

Meanwhile, Sunny Leone reveals that the wildcards were given the challenge to make a guy propose on his knees, a cheek kiss and make one remove his shirt.

The guy's face pales and Joshua lies to make Kashish believe him again but she does not forgive him.

This is the end of Today’s episode.

The latest promo for this weekend's Splitsvilla 14 (11 December 2022) shows a new twist arriving in the Splitsvilla islands in the form of three new wildcards.

The girls get to see the boys with the new wildcards which causes some major scandals forming as Justin dances intimately with one girl and Joshua kisses another girl.

Kashish and Sakshi Shrivas question their boys why they were being so intimate with the new girls.

Another promo for this weekend's Splitsvilla X4 (11-12-2022) shows the dumping session in progress with shocking twists and turns.

Sunny introduces the oracle cards and says that there has been a secret mischief maker between the contestants to stir trouble between the connections.

This was done to test the bond of the couples forming in the show.

© Copyright tellybest.com, 2022, 2023. All Rights Reserved. Unauthorized use and/or duplication of any material from tellybest.com without written permission is strictly prohibited.
Cached Saved on: Wednesday 25th of January 2023 09:39:23 AMCached Disp on: Sunday 5th of February 2023 02:51:31 AM