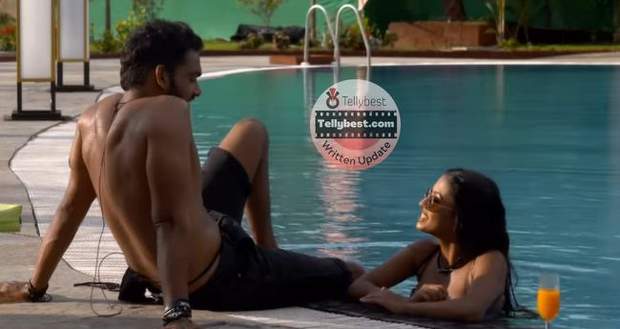 Today's Splitsvilla 14 14th January 2023 starts with the contestants returning from the dumping session and discussing the things that took place.

Justin and Sakshi sit to talk to each other as Justin explains to Sakshi that he is never against her and wants to be with her all throughout the game.

However, Sakshi tells Justin that even if they play together, they will have no power to enjoy themselves as they are not an ideal match.

The next day, a scroll comes that states that the next challenge will only be performed by the girls who will do it for their connections and the winners will get a chance to go on a date together.

The girls get excited about the challenge and divide themselves into two pairs and one trio with Moose and Sakshi being one pair, Prakshi, Mehak, and Hiba being the trio, and Soundous and Shrea being the other pair.

Arjun and Sunny announce that the girls will go to the local market to carry out their tasks and complete the dares after finding the shops with the wild stone flags.

The boys and the ideal matches will stay back at the villa until the challenge is over.

The girls enter the local market and start searching for shops with wild stone flags.

As the girls start to discover the dares, the dares turn out to be: To dance with a boy by asking a random couple, to make a boy do 20 pushups, to walk in the market by making a chain of 5 people for 1 minute, to confess one's love for their connection to the crowd, to take a free gift for their connection.

The girls succeed in doing all the dares one by one with Mehak screaming her love for Kashish in the middle of the market.

Sakshi accepts that she likes the two guys and confesses that she has feelings for both Justin and Tara.

The ideal matches get a surprise

The two ideal matches get a surprise by going on a pool date together.

Pema and Amir enjoy themselves together by having time for themselves on the date while Kashish finds himself in a trap with Akashleena as his date.

Kashish tries to talk to Akashleena so that he gets to know about the secrets between her and Soundous and can plan his strategies according to that.

Akashleena tells Kashish that he is more important to her than Hamid and Soundous leaving him shocked.

Akashleena opens Kashish's shirt by herself when the time to go into the pool comes.

Later, Akashleena shows Kashish her secret tattoo that is in an intimate area and gets happy seeing Kashish blushing like a shy boy.

The winners of the challenge

After the sun sets, Arjun comes with the girls to announce the results of the wild stone challenge.

Arjun announces that Sakshi-Moose did the task in 25 mins, Soundous-Shrea in 31 mins, and Mehak-Prakshi-Hiba in 21 mins.

However, Mehak, Prakshi, and Hiba reveal that they misinterpreted one of the dares and brought only one gift for the connections.

Arjun says that their task is disqualified and Sakshi and Moose get to be the winners of the task.

Mehak gets to know about Kashish and Akashleena's pool date and notices Akashleena wearing Kashish's hoodie and shades which makes her extremely angry.

Sakshi gets the chance to go on a date with Justin and Tara while Moose chooses Honey to accompany her on a date.

The latest promo for this weekend's Splitsvilla 14 (14 January 2023) shows Sunny and Arjun announcing the next challenge for the contestants.

The contestants pair up with the chosen partners to perform the task while Sakshi still performs with Tara.

Another promo for this weekend's Splitsvilla X4 (14-01-2023) shows Akashleena and Kashish talking with each other at the poolside when Akashleena shows Kashish her secret tattoo in an intimate area.

Mehak gets to know about this matter and gets triggered by the fact that Kashish and Akashleena are getting close.

© Copyright tellybest.com, 2022, 2023. All Rights Reserved. Unauthorized use and/or duplication of any material from tellybest.com without written permission is strictly prohibited.
Cached Saved on: Wednesday 25th of January 2023 09:26:20 AMCached Disp on: Tuesday 31st of January 2023 07:16:22 PM