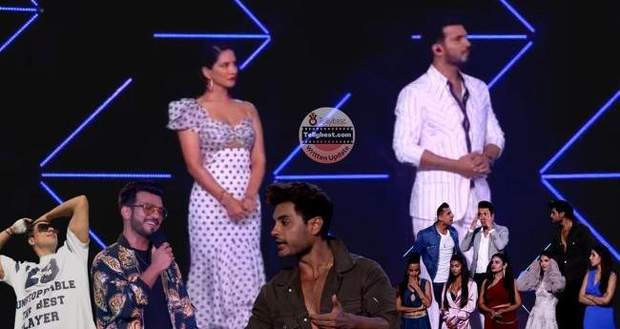 All the girls get shocked to see ex-roadies contestant, Shivam Sharma entering their villa and flocking around him to build a connection.

Kashish succeeds in attracting Shivam's attention which makes Akashlina upset as she expresses her interest in making a connection with Shivam.

Finally, Akashlina gets to talk with Shivam and attempts to build up a connection with whom she can proceed in the game.

The boys arrive at the villa to live together and encounter Shivam as the new wildcard.

A scroll arrives at the villa by Sunny and Arjun who announce that there will be a dance challenge night where pairs and trios will perform to win it.

The contestants get ready for the dance challenge

After hearing the next challenge, contestants begin to pair up in duos and trios so that they can prepare for the performance.

Shivam gets approached by both Kashish and Akashlina and decides to pair up with Akashlina leaving Kashish alone.

The splitsvillans complete their formations and get ready for the dance night.

At night, Arjun and Sunny welcome the contestants to their dance challenge where everyone has to perform on the stage based on which Arjun and Sunny will choose three winners who will perform the next task.

Hamid and Soundous go first and start off the night with a sizzling dance performance which gets a positive response from all the contestants.

Honey, Hiba, and Aradhana make everyone laugh with their funny dance moves.

However, the rest of the two trios, Kashish-Mehek-Kashish and Shrea-Amir-Pema set fire to the stage with their entertaining and emotional performance.

Lastly, Justin and Sakshi Shrivas come on the stage and opens everyone's jaw in shock with their hot sizzling dance performance.

Justin and Sakshi S get the first position in the challenge with Kashish Thakur-Kashish Ratnani-Mehak in second place, and Shrea-Amir-Pema in third place.

The latest promo for this weekend's Splitsvilla 14 (18 December 2022) shows a glimpse of the next couple challenge that will happen next.

The connections perform a sensual dance on the stage to highlight their chemistry.

Arjun announces that he has a surprise for everyone, revealing itself as Sunny performing on the stage on Laila.

Another promo for this weekend's Splitsvilla X4 (18-12-2022) shows glimpses of a fight between Shivam and Honey as they get physical.

Honey complains about Joshua being attracted to another girl which upsets Kashish.