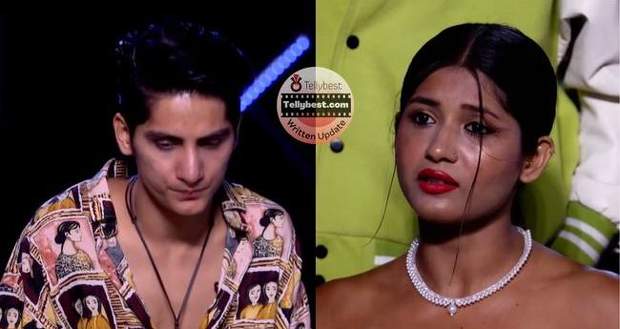 Today's Splitsvilla 14 1st January 2023 starts with the contestants returning to the villa after finishing the task.

Akashleena rejoices in her victory and acts mighty as she will have the power to send people home that night.

Tara comes again to take Sakshi away which pisses of Justin as he does not like Tara's clingy behavior toward Sakshi.

Justin asks Tara to stop interfering between him and Sakshi as he is very uncomfortable with their constant conversations.

Tara says that his feelings for Sakshi are genuine and he wants to be with her as much as possible.

Justin replies that he also feels genuine things for Sakshi S and wants to go forward in the game with her.

As Tara tells Justin that his bond with Sakshi is nothing compared to Tara and Sakshi's relationship, Justin gets triggered and raises his voice at Tara.

The situation worsens as Justin and Tara get violent with each other and the other guys come to stop them.

Sakshi S asks the two boys to stop fighting as she does not want them to hurt each other for her.

The fight prevails for a long time with Justin losing his cool as he had enough of Sakshi and Tara.

Shivam tries to instigate Tara as he feels entertained by the fight between him and Justin.

Sakshi asks Justin to cool down as it is difficult for her to face her past in such a fashion.

Going to Tara, Sakshi makes it clear that she wants to continue with Justin in the game and promises to sort things out after getting out of the show.

Justin asks Sakshi to take a final decision as he is frustrated with Tara's constant interference between them.

Akashlina and Kashish T oppose each other

Akashlina decides that she will save Soundous if she gets the power but Kashish does not agree as he wants Mehak to get safe.

Akashlina tries to convince Kashish but they do not arrive at a mutual decision.

After everyone joins the dome session, Kashish refuses to go in front of the Oracle with Akashleena as he does not want to be an ideal match with her.

Mehak blushes hearing Kashish's words while Akashleena gets pissed off.

Sunny and Arjun ask Kashish T and Akashleena to choose one couple they think should go to the oracle instead of them.

After a heavy argument and different opinions, Akashleena and Kashish choose Soundous and Hameed.

Sunny gets angry at Moose

Moose cuts Sunny's words as she starts explaining the rules and continues to do so repeatedly despite Sunny asking her to keep quite.

Sunny gets angry at Moose and asks her not to interrupt while she is talking to everyone as she does not like being stopped like that.

Moose apologizes for her behavior and asks Sunny to continue.

Akashleena and Kashish T get the major votes from the splitsvillans as they think that they have no chance of becoming an ideal match.

Akashleena and Kashish T choose Shivam, Aradhana, and Sakshi D to dump if they get declared as an ideal match by the oracle.

The wildcards get a chance to choose two contestants each whom they want to save.

Akashleena and Kashish T go in front of the oracle and get declared as an ideal match by the oracle.

While Akashleena gets overjoyed with happiness, Kashish T and Mehek stare at each other with blank faces.

Shivam, Aradhana, and Sakshi D bid goodbye to everyone and get dumped from Splitsvilla.

The latest promo for this weekend's Splitsvilla 14 (1 January 2023) shows Sakshi warning Tara about not interfering between her and Justin's bond.

Sakshi says that he has no right to force his feelings on her if he wants to be with her in the future.

Another promo for this weekend's Splitsvilla X4 (01-01-2023) shows the contestants assembling at the next dome session for the dumping to be done.

Moose keeps interfering with Sunny while she talks which makes her angry and Sunny asks her if she wants to take her place.

© Copyright tellybest.com, 2022, 2023. All Rights Reserved. Unauthorized use and/or duplication of any material from tellybest.com without written permission is strictly prohibited.
Cached Saved on: Wednesday 25th of January 2023 09:48:47 AMCached Disp on: Sunday 5th of February 2023 02:33:34 AM