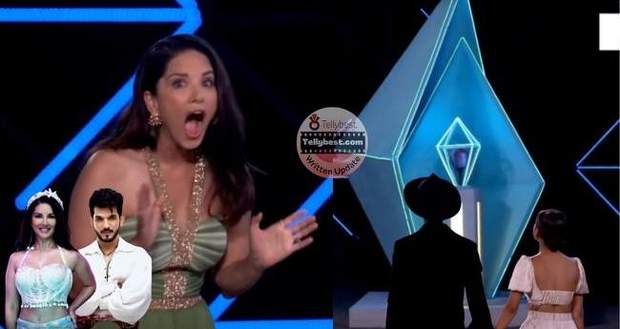 Today's Splitsvilla 14 24th December 2022 episode starts with the winners of the dance challenge getting ready for the next task.

Amir, Pema, and Shrea get blocked

After the contestants gather to perform the next task, Sunny and Arjun announce that only two groups will get to perform among the three.

The unsafe contestants get the chance to vote out one pair and block them from performing the task.

With the majority of the votes against them, Amir, Pema, and Shrea get blocked from performing the task.

Amir's statement about changing colors triggers Sohail and both almost get physical with each other while the other contestants try to hold them back.

As the task requires three people, Justin and Sakshi choose Prakshi to help them out and get ready to go against Kashish Tharur, Kashish Ratnani, and Mehak.

Be My Honey Bunny

Sunny explains the next task as "Be My Honey Bunny" which both trios will be performing and winners will be decided based on the time taken to complete the task.

Two people from each trio will jump into a pool of honey and try to get as much honey on their bodies.

Moving to the next tub by hopping, the two people will try to stick as many ribbons on them which will be needed on the stage.

The third person will get the ribbons off the two people by hitting them with a cloth and use those to mark their way up through a slanted platform.

The green ribbons signify that the team performing can use that path while the red ribbons will be used by one team member of the opposite team who will try to block the pathway.

Justin-Sakshi S-Prakshi win the task as they finish the entire thing earlier than Kashish T-Kashish R- Mehak by 6 seconds.

After everyone comes back from the task and gets ready for the dumping session, Shrea goes to talk to Sohail and apologizes for her past behavior.

Sohail tells them about Shivam trying to pitch Aradhana as he thinks that Akashlina is not the correct choice for him.

This issue raises again in the dumping session when Akashlina asks Aradhana if she and Shivam are forming an alliance behind her back.

Aradhana states that she and Shivam are just friends and have nothing going on between them.

However, as Shivam gets the power to save himself and his connection, Aradhana says that Shivam asked her to become his connection as he cannot bear the smell of onions from Akashlina's mouth.

All the contestants make fun of the situation which gravely offends Akashlina and she says that she is done with Shivam.

Shivam flips on his words and saves Aradhana instead of Akashlina leaving her in the unsafe zone.

Arjun and Sunny announce that the unsafe boys and girls will write the name of each other with whom they think that they have a connection.

If the name of both the boy and girl matches each other, then that couple will be safe from being dumped.

After most of the couples get safe with matching names on their cue cards, Aghaz finds his name written on three girls' cue cards, Akashlina, Hiba, and Sakshi D.

Aghaz decides to save Hiba and gets safe with her while Sakshi D and Akashlina remain in the unsafe zone.

Justin and Sakshi S decide to dump Akashlina and save Sakshi D.

The twist of ideal match

After Akashlina gets dumped, Arjun and Sunny announce that there is a twist yet to be revealed.

Arjun says that Akashlina will be dumped only if Justin-Sakshi S becomes an ideal match after being approved by the Oracle.

Everyone gets shocked to hear the Oracle's decision while Akashlina and Soundous get overjoyed by the announcement.

Justin and Sakshi S get heartbroken and hug each other as they had faith in their relationship and bond.

The latest promo for this weekend's Splitsvilla 14 (24 December 2022) shows Arjun and Sunny introducing the final twist of Splitsvilla in the form of the Oracle.

Justin and Sakshi Shrivas get the chance to ask the oracle if they are an ideal match for each other.

Another promo for this weekend's Splitsvilla X4 (24-12-2022) shows a fire argument between Akashlina and Shivam after the contestants return from the dumping session.

Akashlina gets offended by Shivam's comments and throws away his clothes to the swimming pool in anger.