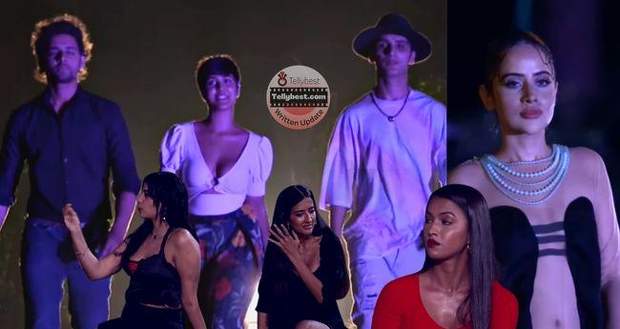 Today's Splitsvilla 14 25th December 2022 episode starts with the return of everyone in the villa after the dumping session gets over.

Justin and Sakshi S feel very down after getting rejected by the Oracle and isolate themselves together to think about what they should do in the future about their connection.

On the other hand, Akashlina takes her revenge on Shivam by throwing toothpaste on his clothes.

Shivam pours water on Akashlina after which both him and Akashlina engage in vulgar language and giving slang to each other.

Akashlina comes out of Shivam's room while Shivam still continues to shout things about her.

Shivam throws his dirty clothes at Akashlina which she throws away in the pool.

As Shivam says that he is the king of Splitsvilla, Honey gets triggered by the statement and comes forward to fight with him.

Honey and Shivam get physical with each other but the others separate the two boys from each other.

After sitting together for a while, Justin and Sakshi S come to a mutual decision they do not want to perform separately and will continue on the show as a pair.

Sakshi asks Justin if he is ready to get dumped as they will not get any power in the future.

Justin says that he is ready to leave the show but does not want to leave Sakshi and go to another girl.

A scroll arrives asking the contestants to get ready for the next task which is going to be spicy.

Urfi Javed comes with the spices

Arjun welcomes the boys and girls to the next challenge named "gossip with golgappe".

Urfi Javed makes her entry as a host who will coordinate the game to bringing out spicy comments and golgappe.

First for the boys, Urfi asks who is the person who talks big but does nothing.

Shivam gets to eat the golgappa from Honey along with some others as they think that he deserves that title.

Honey and Shivam again get physical with each other after Honey comments something on Shivam's father.

However, the situation gets worse when Shivam comments something nasty about Kashish's father who is no more alive.

Kashish loses his control and pounces on Shivam but then breaks down into tears to let out his frustration.

Arjun consoles Kashish and warns Shivam not to comment on anyone's parents as that can be triggering to them.

Shivam asks Arjun why he is unfair to him but did not say anything to Honey, Arjun makes it clear that he warned both of them and does not need to learn from Shivam.

Urfi bursts in anger on Hiba

As the next tagline, #fashiondisaster, for the girls get announced, the girls start feeding each other the golgappas who they think deserve that title.

Hiba feeds her golgappa to Akashlina and spouts out some disgusting comments which are racist.

Urfi gets offended hearing such nasty words and asks Hiba to explain what she means by saying those things.

Hiba asks Urfi not to shout at her in an arrogant manner which triggers Urfi and she asks her to behave herself.

Urfi asks Hiba to play Splitsvilla among themselves as she is no longer a contestant.

Making it clear that there will be consequences if anyone misbehaves with her, Urfi gives a final warning to everyone.

Aradhana breaks down into tears as she tells what kind of comments Soundous and Akashlina have made about her.

The next two segments go smoothly as the tagline "Joru Ka Gulam" comes for the boys and "Guttermouth" for the girls.

Hamid and Justin get tagged as "Joru Ka Gulam" while Akashlina and Sakshi S gain the title "Guttermouth".

Before leaving, Urfi announces that she has some more spice for the contestants and calls three people who make their entries.

Sakshi says hello to one of the boys and hugs him as a form of greeting which leaves Justin shocked.

The latest promo for this weekend's Splitsvilla 14 (25 December 2022) shows Arjun announcing that there is a special guest who is going to come to spice things up.

Another promo for this weekend's Splitsvilla X4 (25-12-2022) shows Hiba commenting on how characterless Urfi is and calling her with offensive words.

Urfi asks Hiba to shut her mouth and act like a foreigner which she is as she has no idea whom she is talking to.

Urfi says that she has brought some people with her to spice things up in the show.

All the splitsvillans stare at the three new faces entering the task spot.