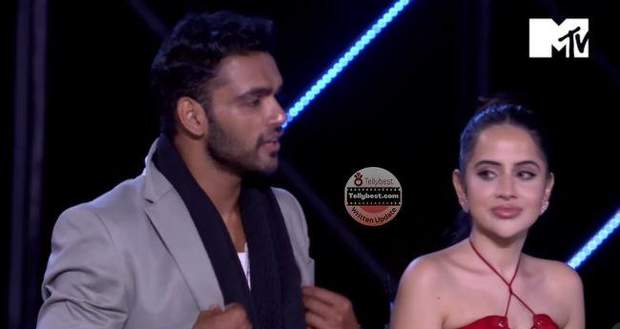 Today's Splitsvilla 14 starts with Rishabh Jaiswal reading the latter and telling everyone that they need to divide each other into three-player groups for the task.

Aagaz Akhtar, Sohail D, and Rishabh Jaiswal decide to play in the same group but other boys order him to choose wisely.

Later when they arrive at the challenge location, Arjun questions Rishabh about last night, and angry Aamir Hossein along with others accuses Rishabh of being a hypocrite.

Sunny then reminds them that if they want to go Island of fling they need to collect a book of roses.

When Kashish gets on the drum, Amir and Joshua start shaking him so he falls whereas Hamid stands in Justin’s way but Justin quickly tackles him and starts giving Honey the roses while doing a funny dance.

On one hand, Hamid is hitting the roses on the love board; on the other hand, Amir and Joshua are trying to make Kashish fall but he holds on.

In the meantime, Justin is doing different funny dance poses to impress Sunny, and even after Amir and Joshua make Kashish fall from the drum, he again gets onto the drum and Hamid has fixed a lot of roses on the love board.

On one hand, Sohail and Aagaz are shaking the drum to make Joshua fall; on the other hand, Rishabh is standing in the way of Amir.

Rishabh grips Hamid so tightly that he is not able to move but after thirty seconds he gets the chance to move forward.

However, before Hamid can give any rose to Amir, Joshua falls to the ground much to Hamid and Amir’s frustration.

Joshua falls several times due to feeling dizzy while Amir calls him “Papa Ki Pari” for being weak.

Hamid and Amir fail to collect many roses due to Joshua’s bad performance.

On one hand, Rishabh quickly tackles the obstacle in his way; on the other hand, Aagaz is holding onto the drum despite the two boys shaking him while singing.

Meanwhile, Rishabh gives Sohail roses with funny dance poses, and due to this Sohail has trouble getting roses from his grip.

Though Aagaz falls one time still their team manages to put many roses on the love board.

Winner of the task

Sunny then announces that the winning party will go to the Pool party and one of team A members will get the chance to play.

Later, Kashish, Justin, and Honey get into an argument in the villa for going to the party.

After a lot of arguments, Kashish and Justin choose Honey so that he can go to the pool party.

In the night, the girls are dancing near the pool, and when the boys arrive there, Saumya Bhandari gives Sohail a welcome hug.

Shera Shimran gets upset to see Aagaz and Aradhana hugging each other as she thought they had something special.

Every boy and girl starts spending some time with each other and Hamid starts flirting with Akshalina Chandra.

Later, Shera and Aagaz get into an argument about him meeting Aradhana.

The latest promo for this weekend's Splitsvilla 14 (27 November 2022) shows the second task between the newly formed connections which is to make the perfect pizza for each other.

Urfi chooses Kashish over Amir which upsets him as he invested all his time in her.

Another promo for this weekend's Splitsvilla X4 (27-11-2022) shows some glimpses from the second dumping session of this season.

Arjun asks Kashish if he is happy to see all the girls for the first time, to which Kashish says that he is happy enough to meet Urfi.

To get to know more, download Splitsvilla 14 all episodes or watch Splitsvilla today's full episode 6 online at voot.com

Today's Splitsvilla 14 starts with the girls entering the second dumping session of the season while the safe couples enjoy their power. The written update will be added after the episode gets uploaded on Voot.

© Copyright tellybest.com, 2022, 2023. All Rights Reserved. Unauthorized use and/or duplication of any material from tellybest.com without written permission is strictly prohibited.
Cached Saved on: Wednesday 25th of January 2023 10:33:06 AMCached Disp on: Monday 6th of February 2023 05:51:37 AM