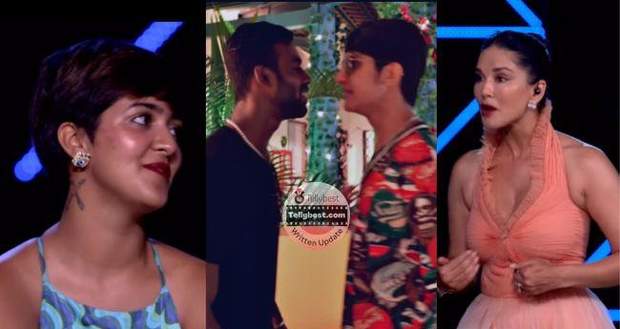 Today's Splitsvilla 14 starts with Arjun and Uorfi introducing the three wildcards to the contestants.

Tara announces that he has come to Splitsvilla to win Sakshi S back and he had a past relationship with her.

Sakshi S explains to everyone that she had a connection with Tara in the past but that ended on a bad note.

Tara says that he missed her and confesses a "I love you" for Sakshi S on national television.

After coming to the villa, Sakshi S and Justin sit together to talk things out so that no misunderstandings remain between them.

Justin listens to Sakshi S's point of view and discovers that she and Tara are business partners after Tara broke things with Sakshi S.

Making sure that he wants to be with her genuinely, Justin asks Sakshi if she wants to go with Tara now that he has come here to approach her.

Sakshi S tells Justin that she does not want to break their connection together but if the matter of ideal match comes, she needs to think about the game.

Tara comes to talk to Sakshi S and finds out that Sakshi S and Justin failed to become an ideal match which makes him happy inside.

Taking Sakshi aside, Tara tells her that he wants her to give them a chance as Justin is not her ideal match.

Sakshi clearly states that she is ready to play with Tara for the game but does not mean it genuinely as she does not want Justin to get hurt.

Tara says that he is ok with it but determines to make Sakshi stay with him anyhow and not let her get lose to Justin.

Justin hugs Sakshi and assures her that he is secure about their connection and trusts her in making a wise decision.

Moose gets attracted to Honey

Moose interacts with everyone in the villa and comes to the conclusion that she finds Honey cute.

As Hamid asks Moose what type of guys she likes, she replies that funny guys attract her and everyone points out Honey.

Honey sits to talk to Moose privately and states that he has committed his sincerity with Kashish R in playing forward in the game.

Moose asks Honey to come to a decision as she likes him quite a lot and wants to build a connection with him.

Honey does not give a clear answer to Moose and talks with Kashish R about the matter.

Kashish R gets a bit jealous seeing Moose approaching Honey as she does not want to lose her newly built connection.

Arjun and Sunny announce the next task and ask who among the girls and boys ate the maximum number of golgappas the previous night.

Hamid and Akashlina get the chance to perform the task as they received the maximum number of golgappas.

Hamid chooses Soundous as his partner while Akashlina asks Kashish T to perform the task with her.

Kashish T agrees after Mehak makes it clear that she does not have any problem with that.

The boys climb a ladder with the help of planks while their one leg remains tied up to a weight.

They unlock the girls situated at the platform and secure keys together so that they can lock the heart present at the middle.

Kashish and Akashlina win the task after successfully locking the heart as they succeed in naming 7 film names with "Dil" in it.

Arjun congratulates them and wishes others the best of luck as the rest of the people are unsafe in the next dome session.

The latest promo for this weekend's Splitsvilla 14 (31 December 2022) shows Justin and Tara getting into a fight as Tara comments about winning back Sakshi's heart.

Justin pushes away Tara in anger and the fight gets bigger until Sakshi S comes to stop them.

Another promo for this weekend's Splitsvilla X4 (31-12-2022) shows the contestants assembling at the next dome session for the dumping to be done.

Moose keeps interfering with Sunny while she talks which makes her angry and Sunny asks her if she wants to take her place.

© Copyright tellybest.com, 2022, 2023. All Rights Reserved. Unauthorized use and/or duplication of any material from tellybest.com without written permission is strictly prohibited.
Cached Saved on: Wednesday 25th of January 2023 11:46:08 AMCached Disp on: Monday 6th of February 2023 05:21:52 AM