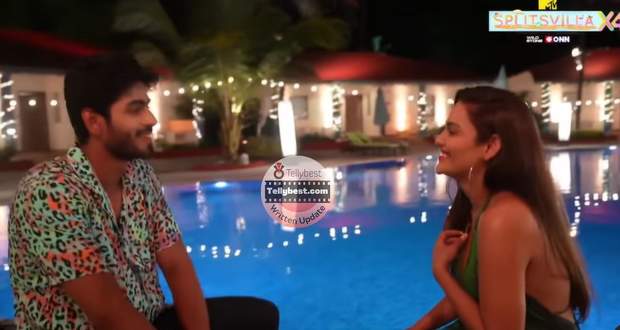 Today's Splitsvilla 14 episode starts with a scroll arriving at the Isle of Venus saying that only three boys among the four can stay which will be decided by the number of roses they receive from the girls.

The girls give out their roses to the four with the result ending in Sohail and Aghaz receiving two each while Rishabh and Honey get three each.

Sohail decides to give up his rose to Aghaz as he has not met the girls once and wants to build a connection with Aradhana.

The boys follow the girls into their rooms with Honey going with Akashlina, Rishabh going with Sakshi Dwivedi, and Aghaz going with Aradhana.

Sohail comes back to the Isle of Mars and hands the boys their respective connection's messages for them.

The boys choose their partners with whom they want to perform the task.

The couples have to get colors on their bodies and rub them on the canvas through their bodies without using their hands.

Sakshi Dwivedi gets warned by Sunny and Arjun for using her hands repeatedly.

Honey and Akashlina manage to finish putting the colors on the entire drawing while Aghaz and Aradhana do the coloring with the most precision.

Hence, Arjun and Sunny decide to announce both Aghaz-Aradhana and Honey-Akashlina winners.

With all the boys unsafe except Aghaz and Honey, the third dumping session starts.

The girls of the winning couple get the power to save two boys after which they decide to save Sohail and Hamid.

A controversy starts with Urvi questioning Kashish if he has stated that Urfi will be playing with 4-5 boys in the entire season.

Kashish states that he has not said anything like that while Aghaz and Rishabh continue to tell Urfi that Kashish has said that thing in front of everyone.

The safe girls vote for which couple they want to get the power to dump one guy.

Honey and Akashlina get that power and dump Rishabh Jaiswal by taking his name.

The latest promo for this weekend's Splitsvilla 14 (3 December 2022) shows the new matches performing their couple's tasks and trying to be safe from the next dumping session.

Kashish and Urfi argue and break their connection with each other after Kashish states that he and Urfi are very different types of persons.

Another promo for this weekend's Splitsvilla X4 (03-12-2022) shows Rishabh and Sakshi Dwivedi bonding with each other on their first meeting.

Sakshi says that she finds Rishabh very cute and wants to build a relationship with him.

To get to know more, download Splitsvilla 14 all episodes or watch Splitsvilla today full episode 7 online at voot.com

© Copyright tellybest.com, 2022, 2023. All Rights Reserved. Unauthorized use and/or duplication of any material from tellybest.com without written permission is strictly prohibited.
Cached Saved on: Wednesday 25th of January 2023 01:13:51 PMCached Disp on: Thursday 2nd of February 2023 07:20:53 PM