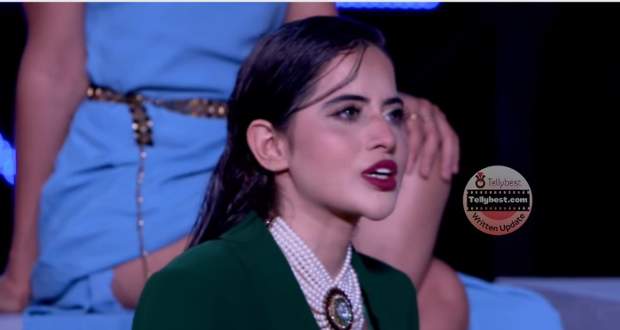 Today's 4th December 2022 Splitsvilla 14 episode starts with the girls returning from the dumping session and getting into an argument.

Aradhana and Soumya try to make up with Urfi for not saving Kashish but get into a fight as Urfi dismisses them for not keeping their word.

Sakshi Shrivas bursts out into anger at Aradhana for writing Justin's name which causes a clash between her and Aradhana.

Urfi asks Soumya and Aradhana to get out of her room as she does not want to talk to them anymore and clearly states that she will dump them if she gets the chance.

All boys get to meet all the girls

Just then, a scroll arrives informing both boys and girls that they all will be able to meet each other at another island fling on the Isle of Mars.

The boys reach the date spot and vibe with the music while the girls enter the venue.

All the contestants get hopeful and happy at the same time as they can meet each other without competing in any task.

Aradhana does not talk to Aghaz or Soumya and sits with Kashish and Joshua which shocks everyone.

After Aghaz gets offended about Aradhana's behavior, Aradhana explains that she built a connection in a hurry and is not sure if she wants to continue it with Aghaz anymore.

Aghaz leaves after Aradhana says that she does not want to move forward with him in the game which makes Shrea happy somewhat.

Justin and Sakshi Shrivas go on a private date and spend a cozy and romantic time with each other.

Soumya and Sohail try to make up with Urfi but she shuts them saying that she likes Sohail but hates Soumya as she is a b*tch.

After that, Kashish and Urfi go on a private date where they end up resolving all their misunderstandings and dance together happily.

On the other hand, Honey says that Akashlina is not letting him talk about his views while Akashlina replies that she has been listening to him only.

Soundous and Hamid come and hear their problem trying to resolve the tussle between them.

Joshua advises Kashish to be real to herself and not get influenced by anyone in the show.

A scroll arrives with a twist

A scroll comes which asks the girls to get divided into pairs and choose one guy they want to perform the next challenge with.

Various groups and alliances start to form for the formation of the trios who will perform the task the next day.

Amir, Pema, and Shrea form a trio to prove themselves, Sakshi Dwivedi, Aghaz, Sohail, and Soumya form their own group, whereas Kashish, Urfi join Sakshi Shrivas and Justin to form an alliance.

Aradhana leaves Soumya's side and joins Joshua and Kashish to form a trio while Soundous, Akashlina, Honey, and Hamid join their alliances.

With 5 boys paired with 10 girls, the contestants look forward to the next challenge.

After the girls return, Urfi tells Soundous about Aradhana trying to take away Hamid which causes a major argument between them.

The season of breakups in Splitsvilla, Urfi and Kashish's Breakup

The next day, all 5 boys and 10 girls gather at the beach to perform the task.

Aradhana tells Sunny and Arjun about Soundous saying some really dirty things to her just because she said that Hamid is cute.

After the heat between Soundous and Aradhana cools down, Urfi announces that she wants to switch positions with Sakshi Dwivedi and perform with Soumya.

Sunny warns Urfi that Sohail is Kashish's friend but Urfi says that she likes Hamid, Joshua, and every boy jokingly.

Kashish enters the next moment along with Honey and Aghaz and gets offended upon hearing Urfi's statement.

Urfi shuts down Kashish completely by saying that she is done with him and does not want to be with him anymore.

Kashish breaks down into tears hearing Urfi as he was starting to feel something for Urfi genuinely.

Sunny and Arjun try to comfort Urfi and Kashish who both shed tears after ending their relationship.

The latest promo for this weekend's Splitsvilla 14 (4 December 2022) shows the issue between Kashish and Urfi after Urfi asks Kashish if he has said that Urfi will try to rope in 3-4 boys at the same time.

Kashish tries to justify him but Urfi gets offended by his comment.

Kashish and Urfi argue and break their connection after Kashish states that he and Urfi are very different types of persons.

Another promo for this weekend's Splitsvilla X4 (04-12-2022) shows Rishabh and Sakshi Dwivedi bonding with each other on their first meeting.

Sakshi says that she finds Rishabh very cute and wants to build a relationship with him.

© Copyright tellybest.com, 2022, 2023. All Rights Reserved. Unauthorized use and/or duplication of any material from tellybest.com without written permission is strictly prohibited.
Cached Saved on: Wednesday 25th of January 2023 05:18:03 PMCached Disp on: Thursday 2nd of February 2023 08:40:23 PM