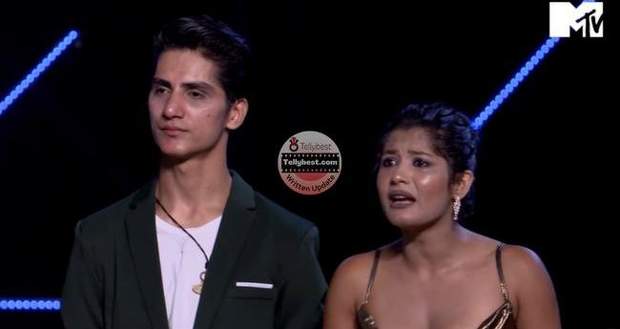 Today's Splitsvilla 14 7th January 2023 starts with Mehek Sembhy crying while Prakshi is trying to console her.

When Mehek comes out of the washroom, Kashish arrives to console her as he himself cannot believe that he is an ideal match with Akashlina.

Putting an arm around Mehek, Kashish urges her to open up if she is hurt, but Mehek pushes him away.

She even orders Kashish to bring Prakshi to her.

Later, Kashish goes to ask Prakshi Goyel for help but Prakshi asks him if he knows how Mehek is feeling right now in an arrogant manner.

Trying to make a point, Kashish tells Prakshi that he only had two options either make an ideal match with Akashlina or go home.

He even tells Prakshi that he chose Akashlina only because he wanted to stay in the game.

However, Akashlina jumps into the conversation by saying that she did not ask Kashish to go with her it was his own choice.

Akashlina further accuses Prakshi of wrongly influencing Mehek which triggers Prakshi and she starts yelling at Akashlina for this.

Meanwhile, Kashish stands there like a statue as he does not know how to stop the argument.

Once Mehek takes Prakshi away, Akashlina tells Soundous Moufakir that now Karma is biting the contestants' back so she will just enjoy it with a smirk on her face.

The next morning, Moose Jattna tells Honey Kamboj that she likes him and she would have given him love, strategy, and cells but he is roaming with fake people.

In reply, Honey urges her to find a new guy since he will go to the oracle with Kashish Ratnani but Moose announces that she only likes him.

Even Kashish reminds Moose how she always calin that she would not come between any connection but Moose announces that she thinks Kashish R and Honey’s connection is fake.

Afterward, Moose reads a template that states that the contestants need to divide themselves into two nine members teams and one person will be left alone.

Hearing this, every contestant starts talking in groups to make the team and Sakshi Shrivas goes to talk to Justin D’Cruz.

During the conversation, Justin clearly states that he will not play with Tara and does not change his decision despite Sakshi’s request.

Later, watching Sakshi walk hand in hand with Tara, Justin gets upset and thinks his connection with Sakshi is growing weak.

Even Sakshi feels sad as this is the first time she and Justin will play in a different team.

When Sunny sees the teams, she tells Akashlina and Kashish that they will enjoy the game and that since they are safe, they will not play.

This decision makes Akashlina happy as she wants to watch the game like a queen whereas Kashish gets upset as he thought he will plan with Mehek.

Afterward, when Sunny asks Justin and Sakshi why they are playing in different teams, Justin announces that he was not ready to play with Tara.

Hearing this, Tara replies that his purpose for coming here is fulfilled which hurts Justin and he accuses Skashi of using him.

Sakshi asks Justin if he really thinks that and Justin announces that he does not know turning away.

While Sakshi looks upset, Justin thinks it may have ended his relationship with Sakshi.

Afterward, Sunny announces that today’s game name is Chu Kabadddi and explains the rule of the game.

In this kabaddi, Sunny announces that the contestants will take their connection name during the raid.

Hiba gets the chance to be Joker since nobody chooses her and she can enter any team by eliminating someone.

Mehek gets three points during the game when she enters the opposite team, which makes Kashish happy.

Afterward, when Moose takes Arjun’s name during her turn as she does not want to give more priority to Honey but Arjun stops her.

Even after that, she takes Aamir’s name only but fails to gain any points.

After the female turn in over, Justin starts his raid and snatches three points from the opposite team while mumbling Sakshi’s name.

Looking at Justin’s move, everyone praises him and Sakshi also appreciates his move.

The end of Sakshi and Justin’s connection

During round two, when the girls start to play again and when Sakshi goes to play, she takes Tara’s name which makes Justin very angry.

Meanwhile, Tara gets extremely happy as Sakshi has finally accepted it.

This time, Hiba gets the chance to choose, she chooses to kick Sherya out of the team but does not win any points for the team.

Seeing Hiba’s partiality towards the opposite team, Soundous gets angry and yells at her for making them loose.

Later, when Tara arrives to play, he does not make any move which upsets Justin as he was eagerly waiting for Tara to touch him.

Tara’s stupidity upsets his own teammates and he remains silent.

When Hamid makes a comment, Aagaz becomes violent and attacks the opposite boys, and even uses some foul language.

Aagaz even calls himself a bad boy but when Arjun yells at him, he walks away.

The winner of the task

Meanwhile, Hiba replaces Kashish R from the team bad gangsters, and Pema wins in her turn.

In the last round, Hiba cannot touch anyone which upsets her team members in her turn.

Afterward, Soundous goes to raid but the team Bad Gangstars pounce on her which results in her losing.

Later, Justin goes to raid and takes out his frustration by winning.

In the end, Team High wins but Arjun keeps suspense about what they will get for winning.

After the game, Sakshi accuses Justin of showing his true colors but Justin reminds her how he pleaded with her to play with him.

This makes Sakshi angry and she announces that she wanted her friends and Justin on the same team but Justin did not let her.

Sakshi even asks Justin if he knows how she is really feeling now and she knew she cannot upset both of them. In reply, Justin tells her that he step down to make the decision better for Sakshi.

While Sakshi's eyes get teary and she walks away, Justin thinks Sakshi has used him.

The latest promo for this weekend's Splitsvilla 14 (7 January 2023) shows Mehak breaking into tears after returning from the oracle session.

Prakshi tries to comfort Mehak seeing her condition and talks with Kashish so that he can sort things out with her as he has already become an ideal match with Akashleena.

Another promo for this weekend's Splitsvilla X4 (07-01-2023) shows the contestants assembling at the next dome session for the dumping to be done.

Sakshi S pairs up with Tara instead of Justin and tells Justin that she is going to play with Tara from now on.

© Copyright tellybest.com, 2022, 2023. All Rights Reserved. Unauthorized use and/or duplication of any material from tellybest.com without written permission is strictly prohibited.
Cached Saved on: Wednesday 25th of January 2023 09:48:40 AMCached Disp on: Tuesday 31st of January 2023 07:23:33 PM