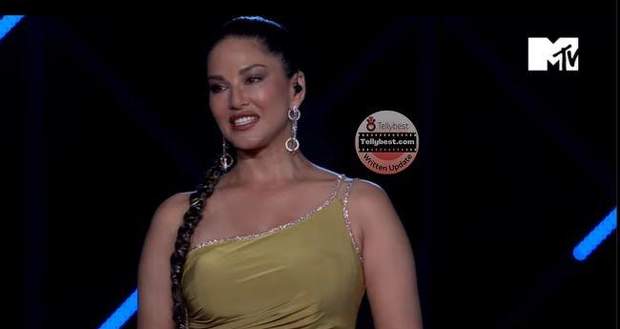 Today's Splitsvilla 14 8th January 2023 starts with the tasks of the day.

Team High compete with each other in the task in which the first-round girls are blindfolded while guys wear the lungi and guide them to walk between the beams.

Meanwhile, Arjun asks the guys to do a lungi dance while the girls are searching for the coconut.

Hamid breaks Justin's heart by aiming at his heart board.

Amir aims at Sohail’s heart board and breaks it successfully winning the first round after along with Hamid.

Hamid Barkzi and Soundous Moufakir and Amir Hossein and Pema Leilani fight for an advantage in the dumping zone.

The round starts, the guys run with girls carrying them bridal style and the girls instruct the boys in the shape of emojis which they collect hurriedly.

In the end, Amir Hossein and Pema Leilani fix the emojis in the correct shape and guess the song correctly and win the game.

Hamid blames Kashish for flipping by gesturing to Justin to break his heart in the earlier round.

Kashish tries to justify himself but Hamid doesn’t forgive him and keeps taunting him. So, Kashish breaks his friendship with Hamid and challenges him that he has lost all his respect for him.

Justin and Moose and Sohail and Shreya are asked to save one pair each and Samarth replaces Hiba with Mehak.

Hiba calls Samarth an idiot and tells him to not come to her crying.

Sohail and Shreya save Aagaz and Prakshi while Justin and Moose save Mehak and Samarth.

Moose argues with Kashish and Sakshi taunts Justin for choosing Moose for performing the task.

Justin's heart breaks and he tells Sakshi that he had no option other than to compete with Moose and blames Sakshi for treating him as a hanger.

Justin lets his ego go and saves Tara and Sakshi and welcomes them back to the Splitsvilla.

Kashish vouches to everyone to save Mehak from getting dumped.

Hiba shares her prostitute story and how she saved herself from a racket of prostitutes and met Aagaz who became her first friend and saved her.

Amir Hossein and Pema Leilani get the majority of votes and walked to the oracle which declares them an ideal match and Kashish Ratnani and Samarth Jurel get eliminated.

This is the end of Today's Splitsvilla 14 Episode 18.

The latest promo for this weekend's Splitsvilla 14 (8 January 2023) shows Sunny and Arjun announcing the next challenge for the contestants.

The contestants play in teams and block each other in the game of Kabaddi.

Another promo for this weekend's Splitsvilla X4 (08-01-2023) shows the contestants assembling at the next dome session for the dumping to be done.

Sunny announces that two contestants will be eliminated that day which worries everyone.

© Copyright tellybest.com, 2022, 2023. All Rights Reserved. Unauthorized use and/or duplication of any material from tellybest.com without written permission is strictly prohibited.
Cached Saved on: Wednesday 25th of January 2023 09:38:35 AMCached Disp on: Monday 6th of February 2023 05:57:10 AM