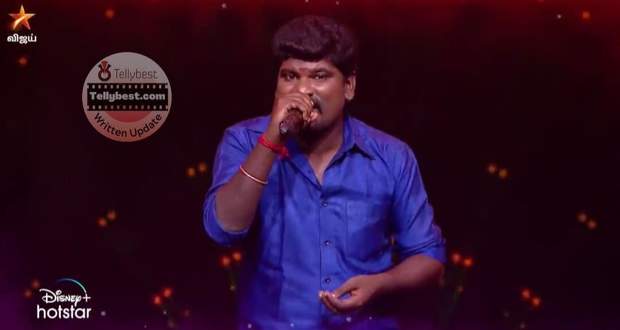 Super Singer 9 is a singing reality show for teens and adults telecasted on Vijay TV. Contestants express their singing talents in front of legendary singers and musicians.

The latest promo of Super Singer 9 (17-12-2022) for the upcoming episode starts with Anchor Priyanka and Makapa introducing the round of the week as the "Time Travel round".

The contestants perform songs that have a personal connection with their memories and share their experiences with the song.

The judges encourage and motivate the contestants for the competitive round and correct their mistakes during their performances.

The new promo of Super Singer 9 (17 December 2022) shows Karthi delivering a stunning performance that was appreciated by all the judges.

He interacts with anchor Priyanka and Makapa which ends up in a funny chat.

Dinesh delivers a rocking performance that is enjoyed by everyone.

Download Super Singer 9 or watch full episodes online at Star Vijay on Saturday and Sunday at 6.30 PM and Disney+Hotstar.

Today's Super Singer 9 17th December 2022 episode is named "Time Travel round" which focuses on contestants expressing their talents in front of the judges.

There is something new in this round called the super zone which has 5 seats, so after every performance, the judges decide if the contestant gets a seat in the super zone.

By the end of the round, the five contestants in the super zone can go directly to the next round.

Whereas, the five contestants who are at the bottom of the super zone will be sent to the audience for voting.

If someone’s performance is better than the other contestant they can replace the other person’s seat in the super zone.

So after every performance, the judges decide who gets a seat in the super zone.

So they can sit back and enjoy all the performances.

The contestants who were sent to the audience for voting in the previous episode are brought to the stage.

Among the 5 contestants based on votes, Emmanuel gets eliminated from the show.

In today’s episode, 7 contestants get to perform.

All of them give amazing performances, the episode starts with all of them getting placed in the superzone but little by little as the competition got intense the contestants were pushed back from the super zone.

By the end of the episode, the super zone had Aparna in the first position, Karthick in the second position, Prashanth in the third position, Yaazlini in the fourth position and Shawshank in the fifth position.

Chandran and Lakshmi are at the bottom of the superzone. But the time travel round is not over yet. 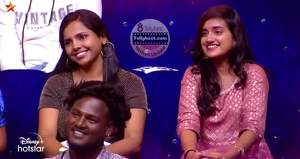 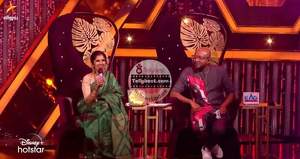 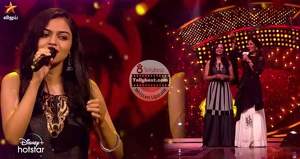 © Copyright tellybest.com, 2022, 2023. All Rights Reserved. Unauthorized use and/or duplication of any material from tellybest.com without written permission is strictly prohibited.
Cached Saved on: Wednesday 25th of January 2023 09:07:36 AMCached Disp on: Wednesday 1st of February 2023 05:23:31 PM