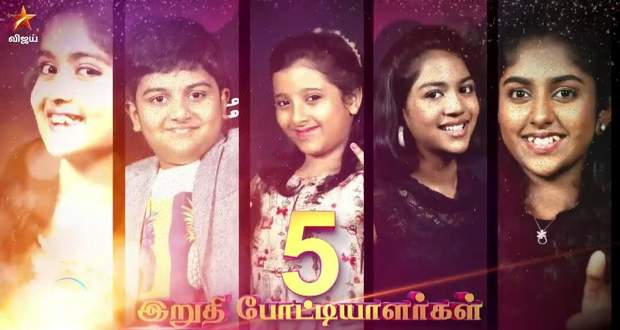 Super Singer Junior 8 is a singing reality show for kids telecasted on Vijay Tv. Kids express their singing talents in front of legendary singers and musicians.

The new promo of Super Singer Junior 8 (26 June 2022) shows glimpses of the previous performances of the finalists.

The winner is selected based on the public voting in the Hotstar app. The one who manages to get the highest number of votes will be declared the winner.

The title winner of the SSJ8 will be declared on Vijay Television this Sunday.

Today's Super Singer Junior 8 26th June 2022 episode which is the grand finale of SSJ8 starts with the stunning entry of the anchors Priyanka and Makapa.

The show starts with a devotional dance performed by the Pondicherry Natyalaya group. The glimpse of the entire journey of SSJ8 was telecasted and it was enjoyed by the audience.

Then, all the five finalists gave a stunning entry with a rocking dance. All the contestants share about their journey in the Super Singer Junior 8.

The anchors then announce the entry of the judges Chithra, Shankar Mahadevan and Kalpana. They enter in giving a stunning dance performance. They are welcomed by the anchors.

The judges talk about their journey in Super Singer Junior 8. They make so much fun and talk about the contestants and encourage them.

The anchors announce the commencement of the first competitive round. The contestants get ready to deliver their first performance.

Trinita enters to deliver the first performance of the finale. She delivers an electrifying performance which is appreciated by all the judges.

Rihana then enters and delivers a thundering performance. All the judges give her a standing ovation and appreciate her.

Next, Neha enters and delivers a soulful performance. The judges Chithra, Shankar Mahadevan and Kalpana get on to the stage and appreciates her. The entire crew of stars and judges gave her a standing ovation.

Judge Chithra along with the Super Singer Stars Rajaganapathy and Bharath give a special performance which is enjoyed by all the judges, stars and audience.

The anchors announce the commencement of the second round of SSJ8.

Trinita enters to deliver her performance. She delivers a stunning performance which is enjoyed by all the judges. The judges appreciate and bless her.

Then, Afina enters to deliver a soulful performance which is appreciated by all the judges. They motivate her for the results.

To everyone's surprise, the anchors announce the entry of the special guest Yuvan Shankar Raja. He shares his insights about the show and gives a special performance.

Then, Neha enters to deliver her performance. She gives a soulful performance which is enjoyed by all the judges. The entire set including the special guest Yuvan Shankar Raja gives her a standing ovation.

To deliver the last performance of the season Krishaang enters the stage. He delivers a stunning performance which is enjoyed by all the judges. The entire set along with the special guest gives him a standing ovation and appreciation. Yuvan Shankar Raja hugs him and blesses him.

The anchors announce the end of the second round.

The anchors then invite the judges and the special guests onto the stage to announce the winners. The total votes are announced as 10000000+ which is the highest vote of the season.

The title winner of SSJ8 is announced by Yuvan Shankar Raja as Krishaang. He receives a 60 lacs villa as a prize from Dac developers. His family gets on the stage and celebrates his success. Yuvan Shankar Raja announces that he will provide an opportunity for Krishaang to sing in his movie.

First Runner Up of SSJ8 is announced as Rihana. She receives a 5 lacs cash prize. His family gets on the stage and shares their emotional insights.

A special award was given to both Trinita and Afina.

The anchors conclude the season by thanking all the sponsors, technicians, contestants, judges and audience. 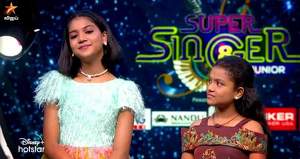 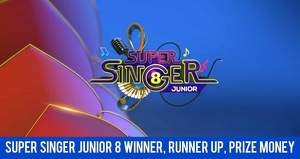 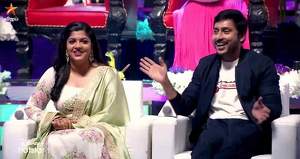