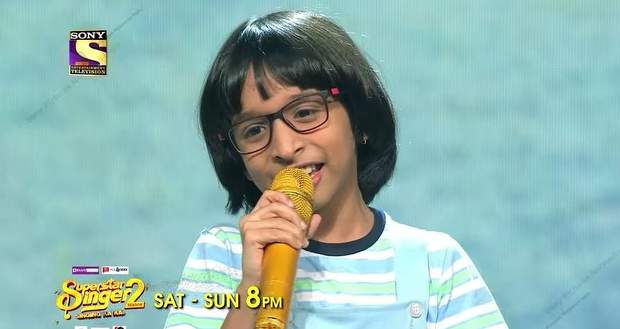 Tapsee Pannu has come to promote her new movie Shabaash Mithu, a biopic on Mithali Raj.

The latest promo for this weekend's Superstar Singer 2 (10 July 2022) shows the immaculate performance from Rituraj on the song "Tu Mile Dil Khile".

The judges shower praises on Rituraj and address him as a storehouse of melodies.

Another promo for the weekend's Superstar Singer 2 (10-07-2022) shows Aruna teaming up with captain Salman and singing "Chak De India" as a tribute to Mithali Raj.

The contestants line up with cricket bats in their hands in order to show respect for the tremendous cricket player.

Pranjal's performance on "Saiyaan" struck a chord with everyone's emotions and brought tears to Tapsee's eyes.

The first performance is sung by Captain Sayli and Vishwaja with some classical hits from the 90s.

Next comes Rituraj who flaunts his beautiful vocals with songs like “Sambhala Hain Maine” and “Tum Mile, Dil Khile”.

Pranjal sings a mashup of a Bengali folk song and the song “Mere Mehboob Qayamat Hogi” and impresses everyone.

Mohammad Faiz comes next and makes everyone go gaga over his vocals with the songs “Ek Sanam Chahiye Aashiqui K Liye” and “Tum Hi Ho”.

Next comes Mani with his high falsettos and bridges as he sings the song “Maan Ki Lagan”.

Rohan and Pratyush pair up and entertain everyone with the song “Chahiye Thoda Pyaar”.

Everyone comes up on the stage for a special performance, a mashup of the songs by the Bhatts.

At Vikram Bhatt’s request, Mohammad Faiz sings the song from their new movie.

Pawandeep Ke Patake wins the title of the best team of the week.

Sayisha, Rituraj, Mani, Aryananda, and Faiz receive medals for the Top 5 performers of the week on combining votes and judges’ scores.

Samaira, Rohan, and Vishwaja end up in the bottom 3 from where Vishwaja gets eliminated from the competition.

© Copyright tellybest.com, 2022, 2023. All Rights Reserved. Unauthorized use and/or duplication of any material from tellybest.com without written permission is strictly prohibited.
Cached Saved on: Wednesday 25th of January 2023 11:58:45 AMCached Disp on: Sunday 5th of February 2023 12:48:27 PM