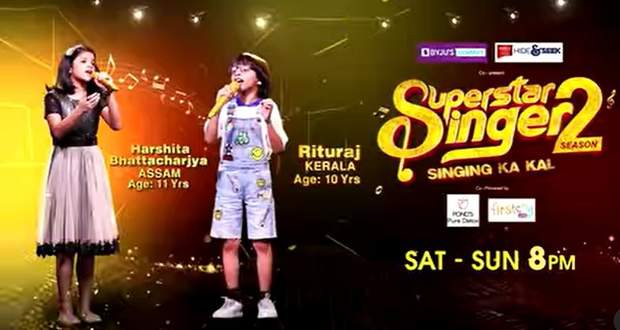 Sony TV's Superstar Singer 2 is continuing to entertain its viewers with marvelous performances and amazing voices.

The latest promo for this weekend’s Superstar Singer 2 (11 June 2022) shows the legendary performance by Mohammad Faiz to give tribute to KK.

The judges shower Faiz with compliments on hearing his strong vocals with the live band.

Another promo for this weekend’s Superstar Singer 2 (11-06-2022) shows the duo Rituraj and Harshita.

Shilpa Shetty joins the judges as a guest and compliments the vocals of Harshita and Rituraj after hearing their performance.

Today’s Superstar Singer 2 starts with Harsh and Bharti being the host and starting the show.

The first performance is performed by Vishwaja accompanied by captain Sayli.

Next comes Rituraj and Aryananda who show their amazing vocals while performing "Mere Dolna".

Pranjal comes on the stage next, spreads magic with his folk-style singing, and impresses the judges.

After reuniting with his mother after several months, Mani delivers an emotion-filled performance and breaks down in tears in the middle of it.

Taking everyone by surprise, captain Arunita and Pawandeep come together to perform some of the classic romantic tunes.

Soyab as usual comes and shakes the stage with his high falsettos.

© Copyright tellybest.com, 2020, 2021. All Rights Reserved. Unauthorized use and/or duplication of any material from tellybest.com without written permission is strictly prohibited.
Cached Saved on: Sunday 2nd of October 2022 06:14:49 AMCached Disp on: Friday 7th of October 2022 02:42:08 PM