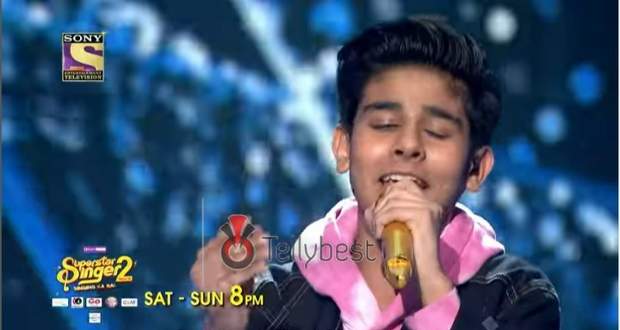 Superstar Singer will welcome Asha Parekh as a special guest on the Saturday Episode.

Ashaji appreciates Chetanya's vocals and wishes him all the best for the future.

Another promo for this weekend's Superstar Singer 2 (13-08-2022) shows Sayisha singing the song "O Mere Sona Re" and making everyone groove.

Ashaji dances with Sayisha to the song and compliments her for her singing.

Today’s Superstar Singer 2 starts with Aditya welcoming the iconic actress Asha Parekh as a guest on the show.

Aryananda comes next with her sweet vocals and impresses the judges with her performances on the songs “Suno Sajna” and “Kya Janu Sajan”.

Sayisha gifts Ashaji with a sash and sings the songs “Sayonara” and “O Mere Sona Re” making the judges dance to the beats.

Next comes Rituraj who sings the songs “Japan Lage Tokyo” and “Tumne Mujhe Dekha” and gets complimented by the judges.

Pranjal comes with his folkstyle singing and starts off with a Bengali folk song and the song “Jis Gali Mein Tera Ghar Na Ho Balma”.

Ashaji becomes emotional after rose petals shower over her and the captains sing her songs around her.