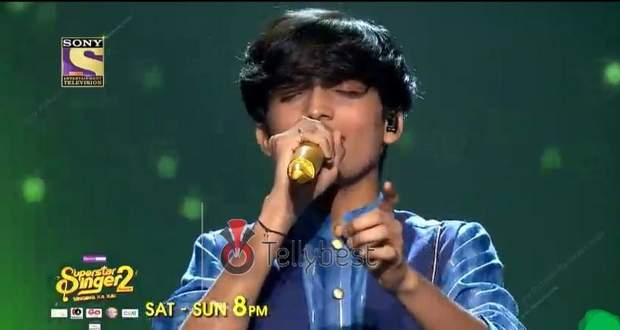 Superstar Singer 2 will be celebrating Independence Day on its set with special performances.

Alka Yagnik compliments Faiz by telling him that whatever he sings, he succeeds in making everyone come into their feels.

Another promo for this weekend's Superstar Singer 2 (14-08-2022) shows Soyab and Chetanya performing as a duet and singing the hit song "Suno Gor Se Duniya Waalo".

Everyone joins them on the stage and dances to the song while enjoying their storming vocals.

Today’s Superstar Singer 2 starts with Manoj Muntashir giving an introductory speech describing the country of India with its unique colors.

Pratyush and Rohan come next as a pair and make the atmosphere a bit lighter with their performance on “Jai Hind” and “Mere Desh Ki Dharti”.

Mohammad Faiz calls out everyone’s patriotism with his performance on the songs “Des Mere” and “Sandese Ateh Hain”.

Sayisha comes next with her soft vocals and sings the song “Dil Diya Hain Jaan Bhi Denge” as a tribute to the family of a martyred soldier.

Next comes Rituraj who dresses up as Mahatma Gandhi and sings the song “Vaishnawajan Toh Tere Kahiyej” and “Mati Pukare Tujhe Pukare”.

Chetanya and Soyab pair up and set fire to the stage with their performance of the songs “Rang De Basanti” and “Suno Gor Se Duniya Waalo”.

Pranjal comes next and sings Tagore’s “Ekla Cholo Re” and “Hum Hindustani” with his folkstyle.

Everyone comes together to sing “Vanda Mataram” as a tribute to all the brave freedom fighters and martyrs.

Arunita Ke Ajoobe wins the title of the best team of the week.

Samaira, Aryananda, Pranjal, Mani, and Faiz win the best 5 performers of the week.