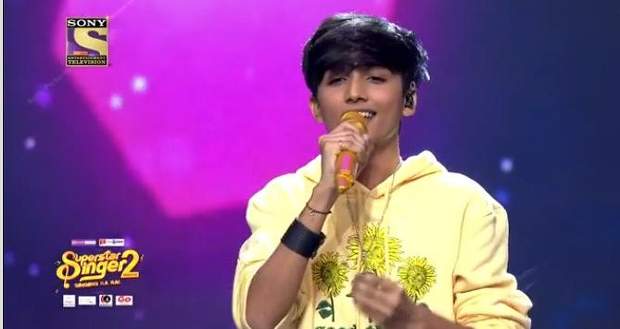 Superstar Singer 2 will have a special theme of evergreen songs for this weekend where the contestants will sing legendary classics from the late 1900s.

Another promo for this weekend's Superstar Singer 2 (17-07-2022) shows Pratyush and Rohan teaming up together and singing the song "Pag Ghungru Bandh".

Sayisha also spreads magic through her vocals as she sings "Tumse Mile Nazar".

Today’s Superstar Singer 2 starts with the grand welcome of Anandji Bhai as a special guest for the episode.

Aryananda comes first to perform on the stage and mesmerizes everyone with her performance of the songs “Raina Beet Jaye” and “Pyaar Hua Ikraar Hua”.

Next comes Samaira who sings with her honey-dripped voice as she sings the songs “Kahi Iye Woh Toh Nahi” and “Aplam Chaaplam”.

Sayisha comes next and makes everyone groove on the beats as she performs the songs “Mur Mur Na Dekh” and “Unse Mile Nazar”.

The fun duo of Pratyush and Rohan comes on the stage and entertains everyone with their performances of the song “K Paag Ghungru Badh Meera Nachti”.

Rituraj surprises everyone by turning into a clown and sings the song “Jeena Yaha Marna Yaha”.

Mani flaunts his vocals as he performs the song “Khaya Kun” and makes everyone emotional.

Mohammad Faiz comes next and wins everyone’s hearts with his performance of the songs “O Raat Bhigi Bhigi” and “Ek Ajnabi Haseena Se”.

Soyab turns the atmosphere a bit emotional with his singing of the song “Akele Hi Chale Ayo”.

Aruna and Chetanya pair up and set fire to the stage with their performance on “Bulaiyaan”.

“Danish Ke Dabang” wins the title of the best team of the week.

Faiz, Rituraj, Pranjal, Pratyush, and Samaira win the medals for the top 5 performers of the week.

The episode ends with Javed Akhtar announcing that there will be no eliminations this week.