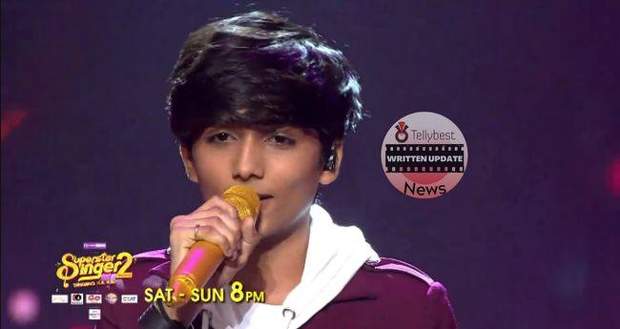 Superstar Singer 2 will have Reena Roy as a special guest on the show for this week.

The judges compliment her for her outstanding vocals and enchanting melodies.

Reena Roy showers Faiz with praises for his singing along with the judges.

Samaira performs first on the stage with her performance on the songs “Ja Re Ja Dilhari” and “Tere Sang Pyaar Main Nahi Torna”.

Rituraj entertains everyone with his singing of the songs “Sanam Teri Kasam” and “Ab Toh Raha Nhi Jaye Re”.

Mohammad Faiz comes next and mesmerizes everyone with his vocals with his performance on the songs “Iye Ankhein Ko Dekhkar” and “Ab Ye Savaan”.

Sayisha makes everyone groove to the beats of the superhit songs “O Jane Ja” and “Disco Station”.

Mani turns the atmosphere into a religious one with the song “Tune Mujhe Bulaya Shera Waaliye”.

Next comes the pair of Pratyush and Rohan who make a humorous atmosphere with their performance on “Khabo Ka Raja” and “A Dekhe Zara, Kisme Kitna Dam”.

Pranjal performs with his folk vibes and sings a Bengali folk song with “Aadmi Musafar Hain”.

Himesh along with the captains gives a tribute to Reena Roy by singing her iconic songs.

© Copyright tellybest.com, 2022, 2023. All Rights Reserved. Unauthorized use and/or duplication of any material from tellybest.com without written permission is strictly prohibited.
Cached Saved on: Wednesday 25th of January 2023 11:33:05 AMCached Disp on: Monday 6th of February 2023 07:16:34 PM