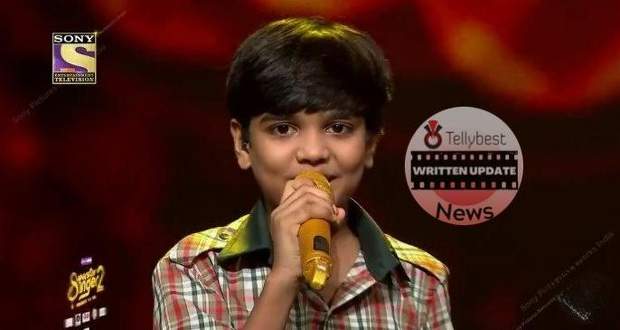 Superstar Singer 2 will have Neha Kakkar as a special guest this week.

The latest promo of Superstar Singer 2 for this weekend (21 August 2022) shows Mohammad Faiz giving a special performance along with guitar on the song "Main Phir Bhi Tumko Chahunga".

Neha Kakkar gets emotional on seeing her picture with Rohanpreet Singh.

Another promo of Superstar Singer 2 for this weekend (21-08-2022) shows Mani performing the song "Mahi Ve".

Neha compliments Mani for his vocals and says she cannot sing the song like that.

Samaira and Aryananda pair up for the first performance and sing “Dilbar” and “Naina” songs.

Rituraj comes next with his amazing vocals and performs the song “Tere Naam”.

Next comes Sayisha who shows an amazing exhibition of drums playing along with singing while performing the songs “Sindbad the sailor” and “Tum Ho Toh”.

Mani features his outstanding vocals with his performance on the song “Mahi Ve”.

Pratyush and Rohan pair up for a fun performance on the songs “Ladki Aankh Mare” and “Badrinath Ki Dulhania”.

Chetanya and Soyab make everyone groove with their performance on the songs “Kala Chashma” and “London Thumakta”.

Lastly, Pranjal comes and spreads the magic of his folk-style vocals by singing the song “Yeh Jeevan Hain”.

Sayisha, mani, Faiz, Pratyush, and Aryananda win the medals for the top 5 performers of the week.

Pawan ke Patake win the best team of the week.

© Copyright tellybest.com, 2022, 2023. All Rights Reserved. Unauthorized use and/or duplication of any material from tellybest.com without written permission is strictly prohibited.
Cached Saved on: Wednesday 25th of January 2023 09:22:37 AMCached Disp on: Monday 6th of February 2023 07:32:42 PM