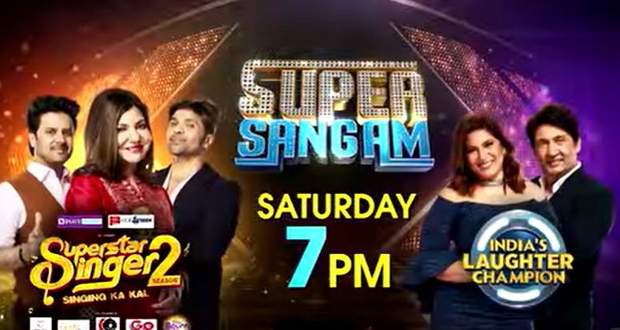 Superstar Singer 2 and India's Laughter Champion will have a Super Sangam this Saturday (23 July 2022) at 7 PM.

The special segment will have contestants from both SSS2 and ILC performing together, making the atmosphere filled with music and laughter.

The recent promo for the Superstar Singer 2 Super Sangam (23-07-2022) shows Sayisha performing with Vignesh and Anna making the judges experience the essence of music accompanied by comedy.

Sayisha sings the upbeat song "Ek Do Teen" while Anna, the puppet doll of Vignesh dances to the tunes.

Today's Superstar Singer 2 will amalgamate with India's Laughter Champion for a special segment.

Aryananda starts the string of performances by singing a sweet and light-hearted song.

Along with his unique folkstyle, Pranjal sings the song “Teri Deewangi” and gets praised by the judges heavily.

Accompanied by a comedian, Pranjal learns the modern tips of socializing which makes up the best comedy session.

Aruna comes next and performs powerfully in the song “Chatur Anar” and surprises everyone with her vocal skills.

Pratyush brings his hilarious dishes for the comedians from India's Laughter Champion which makes everyone give hilarious reactions toward it.

After the comedic segment, Rohan and Pratyush pair up and sing “Golmaal” and “O Savaria”.

Vignesh and Anna entertain everyone with their jokes before Sayisha comes on stage and starts her performance on “Ek Do Teen”.

Jay Vijay Sachin mimics various voices and continues to entertain everyone in the audience while flirting with Alka.

Soyab performs on “Dil Mera Hay” and gets complimented by the judges and guests.

Mani makes his entry in a Punjabi avatar and sings the song “Jhoom Barabar Jhoom” while playing the dhol himself.

Everyone joins Himesh on the stage for a special remix of “Aashiq Banaya” making everyone grooves on the beats.

Nitesh Shetty from ILC comes on the stage and presents a comedy session making everyone laugh.

Imtiaz Ali comes in as a guest along with Miladuri Kumar to join the show to promote his show “Dr. Aurora.”

Mohammad Faiz comes and performs the songs “Hawayein” and “Tumse Hi” making Imtiaz turn into a fan of his.

Imtiaz Ali wishes Chetanya the best of luck while gifting him a rockstar leather jacket.

The comedians present some skits to make the audience laugh their hearts out.

© Copyright tellybest.com, 2020, 2021. All Rights Reserved. Unauthorized use and/or duplication of any material from tellybest.com without written permission is strictly prohibited.
Cached Saved on: Saturday 1st of October 2022 11:36:41 PMCached Disp on: Thursday 6th of October 2022 04:28:01 PM