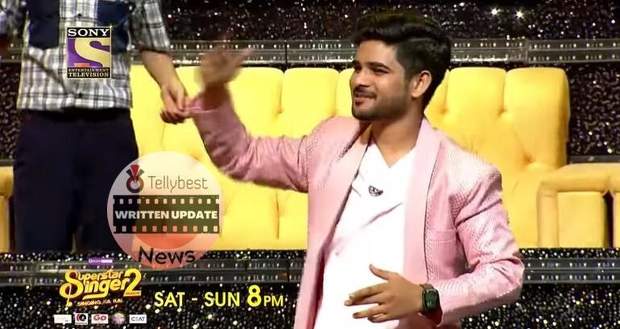 Superstar Singer 2 will have its semi-final this weekend.

The latest promo of Superstar Singer 2 for this weekend (28 August 2022) shows a glimpse of the performance of Mohammad Faiz.

Faiz says that he wants everyone's writing on his shirt as the show is ending soon so that he can preserve the memories he spent there.

Another promo of Superstar Singer 2 for this weekend (28-08-2022) shows Faiz singing the song "Ay Kash Ke Hum" and impressing the judges.

Today’s Superstar Singer 2 starts with Aditya announcing the semi-finals and asking the audience to vote for the finalists that will be selected by the end of the day.

For the theme of 90 songs of the 90s, Samaira comes first and sings “Dil Hain Ki Manta Nahi” and gets complimented by Alka Yagnik.

Rohan comes next with his goofiness and performs the songs “Chori Chori Jab Nazre Mili” and “Zara Zara”.

With his unique tone, Pratyush sings “Jabse Tumko Dekha Hain Sanam” and gets complimented by the judges by getting a toofani performance tag.

Getting a solo of his own, Chetanya sings “Abhi Zinda Hoon” and “Mera Chand Mujhe” captivating everyone with his vocals.

Aryananda comes next with her soothing vocals with her performance on “Chale Aye” and “Ghunghat Ki Ar Se”.

Sayisha sings “Baazigar” and “Dekha Hain Pehli Baar” making everyone groove with the rhythm of the song.