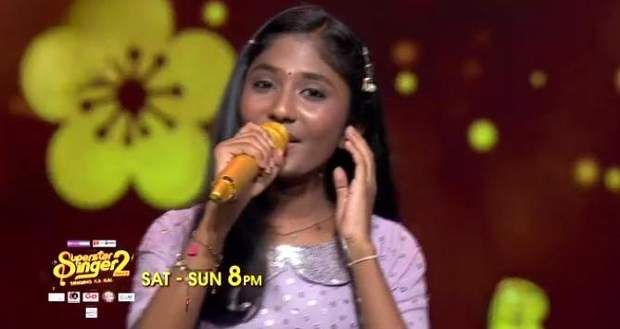 Superstar Singer 2 will celebrate Raksha Bandhan this week with special guests and performances.

The latest promo for this weekend's Superstar Singer 2 (6 August 2022) shows Akshay Kumar joining the judges as a special guest and getting emotional on seeing pictures of him and his sister.

Akshay Kumar says that he considers the bond between him and his sister to be the most precious in the world.

The recent promo for this weekend's Superstar Singer 2 (06-08-2022) shows Aryananda and Rituraj pairing up to execute a heart-touching performance.

Today’s Superstar Singer 2 starts with the contestants and captains celebrating Raksha Bandhan together.

Bollywood Superstar Akshay Kumar joins the judges as a special guest for the episode.

Next comes Mani with her spectacular vocals who sings the song “Teri Yaad Saath Hain”.

As Akshay Kumar gets emotional after hearing an audio message from his sister, Rituraj and Aryananda pair up to sing “Ek Hazaron Mein Meri Bahena Hain”.

Soyab and Chetanya pair up and make everyone groove to the beats of the song “Mast Kalandar”.

Himesh and Akshay perform a song together to show their partnership in singing.

© Copyright tellybest.com, 2022, 2023. All Rights Reserved. Unauthorized use and/or duplication of any material from tellybest.com without written permission is strictly prohibited.
Cached Saved on: Wednesday 25th of January 2023 01:46:57 PMCached Disp on: Thursday 9th of February 2023 08:08:02 AM