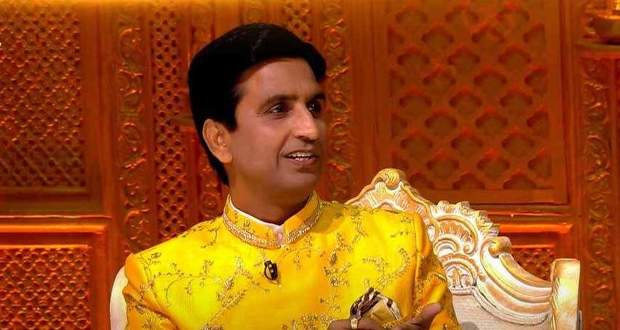 Zee TV's Swarna Bharat show is about to punch into its second week after its grand premiere the previous weekend.

The show has succeeded in captivating the audiences' hearts through its devotional melodies and mythological legends that give us an insight into the events that happened in the past.

The participants will devote their performances to Mother Earth as a tribute to save the earth and spread awareness among people to take care of our mother nature.

The latest promo of Swarna Swar Bharat (29 Jan 2022, 30 Jan 2022) gives a sneak peek of the performance by Divakar Sharma from Delhi, Kumar Vishwas praises his voice and tells that God himself resides in his eyes.

Another promo for this weekend shows Kumar Vishwas explaining the meaning of the word "GOD" as the generator (Brahma), Operator (Vishnu), and Destroyer (Shiva).

Today's Swarna Swar Bharat Episode begins with the devotion for the Bhu Devi or mother earth.

All the participants inaugurate the show by doing the puja of Maa Saraswati and singing devotional hyme in the name of the Goddess.

The first performance is presented by 9 years old, Atharv Bakshi from Jharkhand who sings "Shri Ram" to call Lord Ram.

Moving on, the second performance is done by Amrita Rajan from Kerala who devotes her song to Lord Krishna by singing the song "Kanha So Ja Zara" integrating Malayalam verses in it.

The commentators admire her use of language and praise her voice quality.

The next performance starts on the song "Sukh Ke Sab Saathi" sung by Divakar Sharma from New Delhi making the commentators shower him with compliments.

Swarna Swar Bharat moves into its next segment by the start of the Katha telling by Kumar Vishwas.

Kumar Vishwas tells the story about the time when a demon named Haigriv stole the four Vedas of Lord Brahma.

On asking Lord Vishnu for help, he takes the form of a fish and appears in front of King Satyabrat Manu who pays him proper respect and patronage.

Vishnu warns the king to be prepared for a "pralay" and leave the place with all his people.

The next performance is presented by Swastika Thakur from Maharashtra who sings the song " Bara Natkhat Hain Krishna Kanhaiya".

Om Bogane from Maharashtra enchants the mahagurus by his performance of the song "Dhanya Bharat".

Kumar Vishwas completes the next part of the Katha with Vishnu defeating the demon and saving the People and the king from the flood by taking them to the highest mountain.

The episode ends with Kumar Vishwas emphasizing the importance of knowledge.

The first performance of the day is performed by Jyoti Sharma from Madhya Pradesh who sings the song "Jo Tum Toro Piya".

The rally of melody continues with the next song "Duniya Mein Tera Hain Bada Naam" sung by Akash Sharma from Haryana, Kailash Kher sings a song from his compositions enchanting the atmosphere.

The next performance by Sarvashresth Mishra from Bihar on the song "Jo Bhaje Hari Ko Sada" impresses the hard-to-please Suresh Wadhkar.

After a tribute to Mahadev from Kailash Kher, Kumar Vishwas starts the first part of Katha telling in which he tells the story of the Varaha avatar of Lord Vishnu.

Once upon a time, a demon named Hiranyaksh gained a "Vardaan" from Lord Brahma that no animal, dev, or human can defeat him in a fight.

However, he left out the name of Varaha from his list in a hurry of greed.

The singing sage resumes with the next performance by Priyansh Shah from Gujarat who sings the song "Aayo Kaha Se Ghansham".

The next presentation is done by Dhanshree Rajvarsh from Maharashtra with the song "Tora Maan Darpan Kehlaya".

Kumar Vishwas resumes the Katha with the fight between Hiranyaksh and the Varaha form of Vishnu ending with the death of the demon.

He gives the lesson of how greed and pride can be the cause of the end for anyone.

The episode ends with the maha aarti by Ravi Kishan along with all Maha gurus and participants. 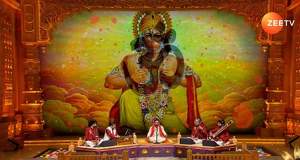 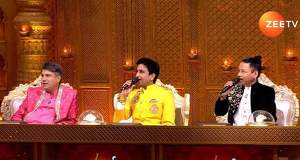 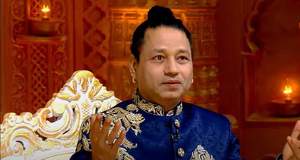