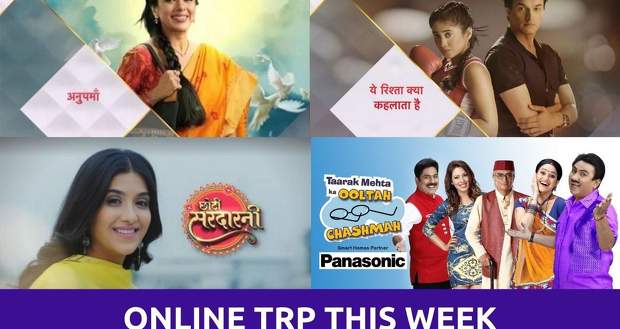 The online Hindi TRP rating for this week is released. The serial ratings of Indian shows are based on online platform telecasts like Hotstar.com, Zee5.com, Voot.com, and sonyliv.com

Anupama is still the number 1 show in Indian TV serials with top rank (gets 44.0 ratings in TRP chart) while Rajan Shahi’s other serial, Yeh Rishta Kya Kehlata Hai (YRKKH) is in 2nd rank position this week.

Star Plus’s other serials that have made it to the top 10 TRP list include Ghum Hai Kisi Ke Pyaar Mein (GHKKPM) in 7th Rank, Saath Nibhaana Saathiya 2 in 8th Rank, and Yeh Hai Chahatein (YHC) in 10th Rank.

Sasural Simar Ka 2 (SSK 2) at 4th rank and Choti Sardarni at 6th rank are the only Colors TV series that have made it to the list.

The following table shows the ranking and ratings of the Top 10 Hindi TV serials TRP online and their TRP points for the fifth week of June.

Let's see if the serials get the same rank or not in the next upcoming week's TRP ratings.