Anupama: Anupama takes a stand for the Shah family

In Anupama future gossips, Kavya (Madalasa Sharma) will try to slap Samar while Anupama (Rupali Ganguly) will stand up for him and will warn Kavya.

So far in Anupama story, Anupama went with Advait for a meeting with the doctor while Kavya got ready for her marriage.

However, in the last episode of Anupama, Vanraj went missing while Kavya threatens Anupama to reach the resort immediately if she doesn't want her to file a case against the Shah's for mentally torturing her.

Now as per the serial spoilers of Anupama, Kavya will get into an argument with Samar and will be about to slap him while Anupama will stop her hand in the air.

Further, she will tell Kavya that she can destroy her Mandap from the same hands with which she promised to get her married to Vanraj.

Let's see if they are able to find Vanraj in the upcoming twists of Anupama serial. 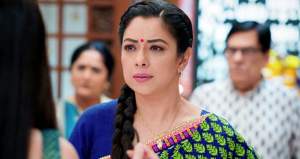