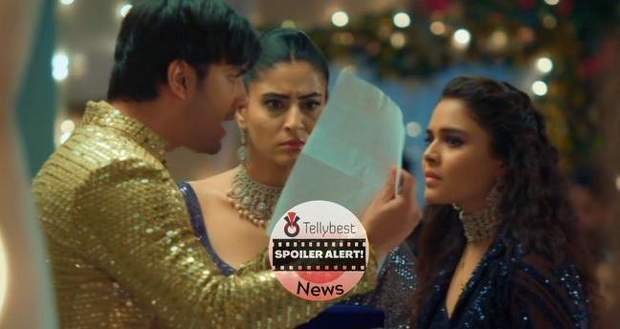 In the upcoming story of Anupama, Adhik will get into a huge argument with Pakhi.

So far in the serial Anupama, Barkha is planning to create differences between Anupama and Pakhi and takes her aside unknown to them they are being followed by Anupama and Adhik.

As per the spoilers of the serial, Barkha shows Pakhi the invoice for the jewelry which states the cost is 60 lakhs.

Adhik gets unhappy and angry at Pakhi as how will she manage to pay such a hefty sum.

Pakhi in retaliation asks Adhik if her happiness matters to him at all as her happiness lies in getting married as she had always imagined.

In the upcoming twists of the serial, Adhik leaves Pakhi mid-performance as he is unable to look at his beloved Pakhi beyond her never-ending greed.

Let us see how Anupama punishes Pakhi for valuing her luxuries over relations and how Adhik handles his and Pakhi's relationship in future episodes of the Anupama serial.

© Copyright tellybest.com, 2022, 2023. All Rights Reserved. Unauthorized use and/or duplication of any material from tellybest.com without written permission is strictly prohibited.
Cached Saved on: Monday 21st of November 2022 01:15:05 AMCached Disp on: Friday 9th of December 2022 04:09:45 AM