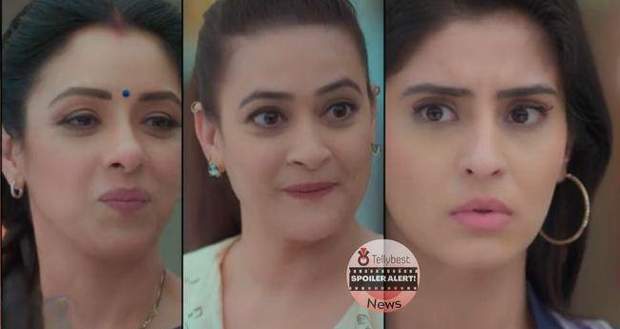 In the upcoming story of Anupama, Anupama's friend Devika will come to her rescue.

So far in the serial Anupama, Barkha has instigated Pakhi against Anupama for not spending lavishly on Pakhi and Adhik's wedding.

When Anupama gives Pakhi her saree, she insults Anupama saying that the saree looks old-fashioned and cheap.

Pakhi further says that she won't wear it as she wants designer clothes only.

As per the spoilers of the serial, after Pakhi, Anupama, Bakha, and Anuj reach the Shah house, once again Barkha provokes Pakhi.

This time Barkha tells Pakhi that she has a designer friend who can make the saree for Pakhi but it will cost 20 lakhs.

In the upcoming twists of the serial, Anupama's friend enters and calls Barkha a wannabe and a fake socialite.

Devika then shows Barkha her place by saying all the things that Anupama can't tell Barkha.

Let us see how Devika saves Anupama and Pakhi from Barkha's games in the future episodes of the Anupama serial.

© Copyright tellybest.com, 2022, 2023. All Rights Reserved. Unauthorized use and/or duplication of any material from tellybest.com without written permission is strictly prohibited.
Cached Saved on: Monday 21st of November 2022 06:07:18 AMCached Disp on: Thursday 1st of December 2022 02:32:32 AM